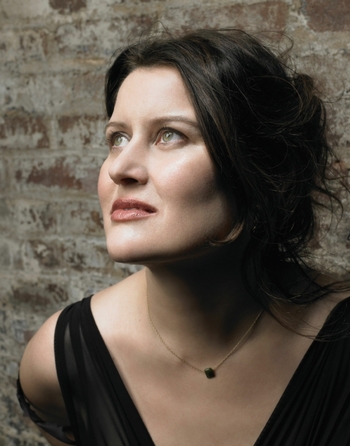 Where do I put this fire?
This bright red feeling...
This tigerlily down my throat?
It wants to grow 20-feet-tall...
Advertisement:

One of the more prominent female singer-song writers who gained popularity during the 90s, Paula Cole (born April 5, 1968) is probably best-known for the songs "Where Have All the Cowboys Gone?" and "I Don't Want to Wait", the latter song which would become the theme to Dawson's Creek. Her songs are musically lush, but tend towards lyrically bleakness with a dark bent.

Born in Rockport, Massachusetts to Stephanie, a visual artist, and Jim Cole, a polka-playing entomologist. She has a sister named Irene. She lived in Rockport with her parents, where she attended elementary school. She was an active and popular student in middle school and high school, holding offices as class president and student council member. This would become important later.

Political with an overtly leftist bent (except on her Grammy winning second album, which largely avoids political tropes), many of Cole's songs deal explicitly with such topics as feminism, racism and discrimination, and more general themes of social justice.

I don't want to wait/For our tropes to be over: