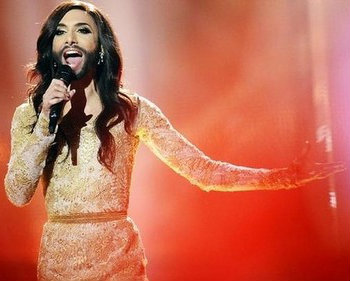 RIIIIIISE LIKE A PHOOEEEEENIIIIIIIXXXXXXXXX!
“This night is dedicated to everyone who believes in a future of peace and freedom. You know who you are — we are unity and we are unstoppable!”
— Winning the Eurovision Song Contest in 2014
Advertisement:

Conchita Wurst (stage name of Thomas Neuwirth, born 6 November 1988) is a singer from Austria, known for performing in gorgeous Pimped Out Dresses, elaborate make-up and jewellery, and a full beard.

Neuwirth invented the character as a call for tolerance and for everything that seems different, and he debuted in the role of Conchita in 2011. Although statuesque and a total diva on the stage, Conchita is also absolutely The Cutie. She's very fond of her fans and hopes to convey a message of worldwide peace, regardless of nationality, sexuality or gender.

Aside from her singing career, Conchita participated in the ORF production The Hardest Jobs of Austria, where she worked in a fish factory, and in Wild Girls, in which a group of candidates had to survive in the deserts of Namibia together with native tribes.

In 2014, Conchita participated in the Eurovision Song Contest with the Power Ballad "Rise Like A Phoenix"

, where she was promptly elected the undisputed Queen of Europe.