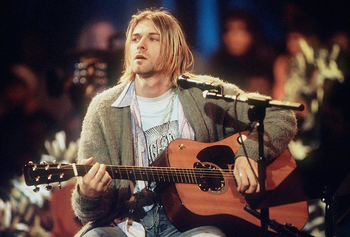 The unwilling icon of a generation.
Influences:
Advertisement:

Kurt Donald Cobain (February 20, 1967 – April 5, 1994) was an American musician, most notably the lead vocalist, guitarist and songwriter of Nirvana, a role that would make him the most important and influential rock star of The '90s in the eyes of many with the mass popularization of grunge and alternative rock the band would go on to achieve.

As a teenager and twentysomething, Cobain listened to a lot of Punk Rock, Heavy Metal, Proto Punk, Alternative Rock, Outsider Music, and regular rock bands to emulate their styles, and when Nirvana became the first of these bands to break to the mainstream, he did everything he could to give his inspirations more attention in the press.

Sadly, he felt his overnight success was embarrassing. He always wanted to be famous, but within alternative rock, not in the mainstream where people could accuse him of "selling out". He tried to do everything to avoid such connotations, even going so far as to release an album meant to alienate the newer fanbase (which wound up having the opposite effect), but Cobain sank away further into drug addiction and depression.

Cobain was found dead on April 8, 1994, joining the long list of rock legends who died at 27. The police concluded that he died on April 5 by suicide with a shotgun, although conspiracy theories still persist claiming otherwise. Much of the fan-base blames his widow, Courtney Love, though he had already alluded to suicide all throughout his life.

His legend remains intact to this day, and Nirvana's albums still get rediscovered by many new young rock bands. He even got respect from older rock stars such as Neil Young, David Bowie, and Bob Dylan. He also had an Odd Friendship with writer William S. Burroughs.

For a list of albums featuring Cobain, see our Nirvana page.

Kurt Cobain and his works provide examples of: