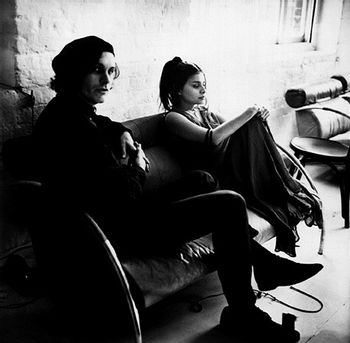 Mazzy Star is an Alternative Rock band from Santa Monica, California, active since 1989. The band is known for its folky, Psychedelic Rock-influenced Dream Pop sound and being a One-Hit Wonder thanks to the song "Fade Into You".

Mazzy Star formed out of the ashes of Paisley Underground band Opal. It is largely based around the creative partnership of guitarist/keyboardist/songwriter David Roback and vocalist Hope Sandoval, with additional contributors being bassist Jill Emery, drummer Keith Mitchell and keyboardist Suki Ewers. Their previous keyboardist, William Cooper, died in 2001.

The band released three albums in The '90s full of slightly melancholic but somehow still nice-sounding, folky Dream Pop with occasional influences from Psychedelic Rock (especially The Doors) and Shoegazing. The most successful of these was So Tonight That I Might See, by virtue of having their most commercially successful song, "Fade Into You", on it.

Mazzy Star never officially broke up, but the duo went on hiatus in 2000. Sandoval occasionally makes guest appearances on other albums (such as for the Chemical Brothers and The Jesus and Mary Chain) and works (very slowly) with the band Hope Sandoval and the Warm Inventions (which included Colm Ó Cíosóig of My Bloody Valentine during the latter's hiatus). Roback moved to Norway and remained really quiet, surfacing for a small acting part in the movie Clean. In 2009, Sandoval confirmed that Mazzy Star were still together

, and that they were just competing against My Bloody Valentine in the "world's laziest band" contest. In October 2011, the band's website announced that they were recording a 4th studio album; the album, Seasons of Your Day, was released in September 2013. The band subsequently returned to their hiatus, with Sandoval continuing her work with The Warm Inventions and making guest appearances on other albums.

Unfortunately, David Roback died at the age of 61 on February 25, 2020. Hope Sandoval has not given any indication on whether or not she will continue to use the Mazzy Star name in his absence.

Their song "Into Dust" is apparently the theme for Gears of War 3.

Tropes used by Mazzy Star include: