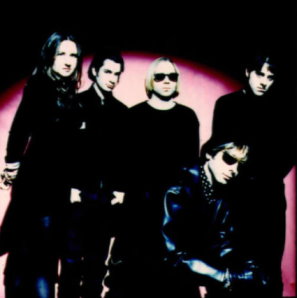 The band's lineup circa 1998.
Advertisement:

Mercury Rev are a psychedelic Alternative Rock/Dream Pop/Noise Pop band from Buffalo, New York, formed in 1989. They are frequently compared to the Flaming Lips, since both bands experienced the same evolution from noisy, punky psychedelia to lushly orchestrated Baroque Pop, Jonathan Donahue was a guitarist in the Lips for a few years early in The '90s, and Dave Fridmann near-exclusively produces both bands.

Their initial lineup was as follows:

This lineup produced two Cult Classic albums, Yerself Is Steam (1991) and Boces (1993), which found a large audience and some chart success in the indie-rock-happy UK. The album's styles are marked by extended run-times, ragged self-production, use of Grasshopper's homemade Tettix Wave Acumulator synth, a chaotic sound that constantly shifts between poppy accessibility and freaky guitar noisescapes, Word Salad Titles and lyrics, and the interplay between Baker's deranged, low-pitched vocals and Donahue's more Jónsi sounding voice.

The lineup was plagued by instability, drug abuse and Creative Differences, and Boces (named after New York's Boards of Cooperative Educational Services) earned infamy as a particularly Troubled Production even by their Rule of Cool standards - one famous story is that either Donahue or Baker tried at one point to gouge out Grasshopper's eye with a spoon.

Baker eventually departed in 1995, and the band's next album See You on the Other Side (1995) captured the resulting transition: Baker took the noisy, confrontational side of the band's sound with him, leaving Donahue to steer the band towards a more accessible, melodic, lush Baroque Pop-influenced sound. However, See You on the Other Side sank like a brick on the UK charts and attracted no attention, leaving Donahue despondent and pushing the band into a hiatus.

Mercury Rev finally regrouped to record 1998's Deserter's Songs, which surprisingly became their most successful album in the UK and Europe, and gave them a minor hit with "Goddess on a Hiway". This convinced them not to disband, and they've continued making Baroque Pop/Psychedelic Rock albums ever since. Their lineup had also been reduced with Chambers and Thorpe leaving soon after Deserter's Songs, leaving Donahue, Grasshopper, Fridmann (who by then retired from touring to focus on his career as a producer), and new drummer/pianist Jeff Mercel. However, as of 2015, only Donahue and Grasshopper remain as official members.

It's not as easy as it may seem, just remember that yerself is steam