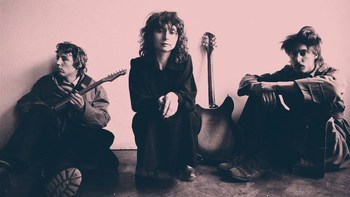 Slapp Happy were an art-pop/avant-pop band. They were a three-piece band whose line-up included Peter Blegvad, Anthony Moore and Dagmar Krause.

Anthony Moore, the experimental composer from England, in 1971 while in Hamburg united with the American-born Peter Blegvad who was his classmate and whom he invited from England. Blegvad was more pop-oriented, meaning the "out there", oddball brand of pop. Then German singer Dagmar Krause joined their team and the trio made their first album Sort of... Slapp Happy in 1972. Faust were their backup band during the recording. The sound of Sort of... was relatively poppy but already tinged with the avant-garde feel.

Their debut failed to sell and they made something even more experimental in 1973 with Casablanca Moon, which again featured Faust as backup, recorded for Polydor. However, the label rejected it, and instead they rerecorded more sentimental versions of the same songs with an orchestra and Virgin Records released them under the name Slapp Happy. The original recordings were released only in 1980 on an album called Acnalbasac Noom.

Late in 1974 they united their efforts with Henry Cow. The latter were somewhat more avant-garde in spirit qualifying as avant-prog/rock in opposition rather than avant-pop. The joint team released two albums, Desperate Straights (which was halfways between two bands respective manners) and In Praise of Learning, already closer to the pure avant-prog. Both albums were creatively successful and Desperate Straights sold a fair amount.

However as two bands were very different in their worldviews, with Henry Cow being very politically engaged and Slapp Happy quite the opposite, soon they parted their ways. Except for Dagmar Krause who stayed with Henry Cow, also patrticipating in Art Bears. Moore and Blegvad, now orphaned, dissolved the band. Slapp Happy still managed to rerelease the original versions of their songs which later appeared on Casablanca Moon in 1980.

Several reunions happened later, first in 1982 when a one-off single was followed by a one-off show in London. In the early 1990s, Blegvad and Moore wrote an opera for German television, Camera (released on CD some years later), in which Krause played the lead role, then in 1995 the trio recorded a new album, Ça Va, generally thought to show a shift towards adult contemporary and lounge music. Their first serious tour took place in 2000 and produced the Live in Japan album. A further reunion happened in 2016 and featured a concert tour. In 2018 they played several dates with Faust as their backing group.