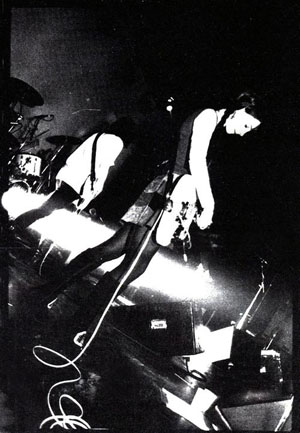 Shoegazing is a subgenre of Alternative Rock that was pioneered and popularized by My Bloody Valentine in the late 1980s-early 1990s. Its sound characterized by a huge wall of guitars playing drone-based riffs, breathy Perishing Alt-Rock Voice singing that is usually rendered low in the mix and often incomprehensible, pounding drumming and a mix that builds up everything into a huge wall of sound where the individual instruments blend together. In addition, a danceable undercurrent can lie beneath this wall of sound (some bands emphasized this to the point of straddling the line between shoegaze and Madchester). In short, a perfect combination of aggressive and dreamy.

While shoegazing can be influenced by Psychedelic Rock (indeed, it's basically that genre taken Up to Eleven), it was influenced by Dream Pop's emphasis on sound over actual song, and indie Noise Rock bands such as Sonic Youth, Dinosaur Jr., The Jesus and Mary Chain, Spacemen 3 and The Velvet Underground.

The name comes from a Sounds review of a Moose concert and was picked up by NME in reference to shoegazing bands' motionless live performances where they mostly stared at their effects pedals (to the right you can see Bilinda Butcher doing exactly that). Ride singer Mark Gardener also attributed the motionlessness to an average presentation, in reaction to the "ego" of famous bands like U2. Melody Maker's nickname for the movement was The Scene That Celebrates Itself, due to shoegazers' habit of moonlighting in each other's bands and attending each other's concerts instead of engaging in petty rivalries.

The genre's first release can actually be pointed to the song "When You're Sad" by experimental dream pop band A.R. Kane (who would later produce the song "Pump Up the Volume" under the name M/A/R/R/S, alongside electronic band Colourbox), released in 1986. However, most people point to the EP You Made Me Realise by the Anglo-Irish band My Bloody Valentine in 1988. They are also responsible for the most critically acclaimed and well-regarded shoegazing album, Loveless (1991), which is seen as the essential shoegazing album for damn good reason. Other great bands in the genre include: Ride, Lush, Kitchens of Distinction, Chapterhouse, Slowdive, Catherine Wheel, Moose and The Verve, the final being a fusion of shoegazing, space rock and psychedelic rock. The only problem with these bands is that they suffer from a pretty bad case of Overshadowed by Awesome thanks to the pervasive presence and legendary reputation of the aforementioned My Bloody Valentine.note You might say "But I know The Verve!", but they never completely fit in with the scene and had a bit of a Genre Shift on the way to success.

The shoegazing genre itself was at the forefront of alternative rock in the UK, which in the late 1980s-early 1990s was split between a spacey, psychedelic alt-rock scene which included shoegazing (roughly corresponding to Southern England - the overwhelming majority of shoegazing bands came from the Thames Valley, which probably contributed to the camaraderie between members and the Scene That Celebrates Itself moniker), and a poppier alt-rock scene which included Madchester (roughly corresponding to Northern England, duh). The genre had a minor chart presence in the UK, with some bands reaching the pop charts with singles or EPs. Lush and Ride both had multiple UK Top 40 hits, and Ride's "Leave Them All Behind" made it to #9 on the UK chart in 1992, the highest chart position for a shoegazing song.

While the genre itself was a mostly British thing, there were a few shoegazey bands to emerge out of the USA, like Starflyer 59, Medicine, The Veldt, Swirlies, and Drop Nineteens. It was also regarded as a significant influence on The Smashing Pumpkins and Deftones, among other successful '90s and '00s bands. That's not to say shoegazing wasn't popular in the United States; My Bloody Valentine, Lush, Catherine Wheel, Ride, and Kitchens of Distinction all had hits on Billboard's Modern Rock chart in the early 1990s. However, the genre's popularity wouldn't last long there due to the rise of grunge and its offshoot genres.

Shoegazing collapsed in the midst of a mid-1990s Hype Backlash, its bands increasingly seen as privileged, self-indulgent middle-class kids with "nothing to say" and being replaced by working-class Britpop bands (who then immediately became filthy rich, privileged, self-indulgent and had nothing to say). MBV went into a hiatus, resurfacing with a reunion tour in 2008 and finally releasing a new album in 2013 after twenty years of Development Hell. Lush pulled an abrupt Genre Shift into Britpop to some success and broke up after their drummer killed himself. Slowdive stuck to their guns, releasing the uncommercial New Sound Album Pygmalion before evolving into the folk-rock/Dream Pop band Mojave 3. Catherine Wheel went into slowly changing their own style and broke up in 2000. Ride broke up in 1996 after failing to adapt to Britpop.

In the 2000s the genre saw something of a resurgence with the indie crowd. In 2001 a band called My Vitriol released an album called Finelines which is given credit with starting the shoegaze movement of the 2000s called Nu Gaze (Coined by Som Wardner himself from My Vitriol). Bands such as Silversun Pickups, Asobi Seksu, Deerhunter, Blonde Redhead, and The Big Pink were bands that followed this new movement. There were also Darker and Edgier bands that used the shoegazing sound to oppress or disquiet rather than uplift, like Singapore Sling (the first band to make a career out of this "darker" sound), A Place to Bury Strangers, The Horrors, Jesu, Have a Nice Life, and The Angelic Process. There are also a few metal bands that have adopted some elements of shoegaze as well (such as Alcest, Deafheaven, Jesu again, arguably Nachtmystium), most of them usually being placed as metalgaze or just post-metal. Then there are bands such as M83, A Sunny Day in Glasgow, and Sweet Trip who have aimed towards more electronic experimentation with shoegaze. Yeah...it's been incorporated into almost everything.

By the 2010s, several of the original shoegazing acts had reunited and released new music, kicking off in 2013 when My Bloody Valentine finally released their long-awaited third album m b v. Slowdive, Ride, Lush and Swervedriver all also got back together, with Slowdive becoming the most successful of the reunion lot critically and commercially.

Has nothing to do with Male Gaze or Female Gaze.

The following are some artists that were part of the first wave shoegazers: