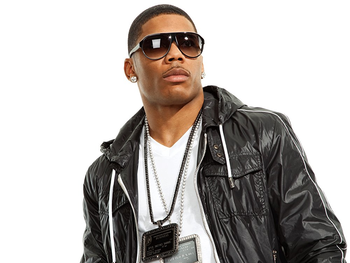 "Hot in, so hot in here!"
Advertisement:

Cornell Iral Haynes Jr. (born November 2, 1974), better known as Nelly, is a rapper from St. Louis, Missouri. His success was unusual for a rapper in the 2000s since he did not come from either the west coast, east coast or southern hip hop scenes. His style of hip-hop is known for having a mellow delivery, his accent and catchy hooks which are more often sung than rapped.

He began his music career as a member of a hip-hop group called St. Lunatics. While they enjoyed some local success in the late 90s, the group were unable to get a major label to sign them. He thus decided to leave the group and pursued a solo career. His debut album Country Grammar was released in 2000. The album was a huge success, producing three top 20 singles (two of which made the top 10) and the album itself received a diamond RIAA certificate (the ninth hip-hop album to do so) and is currently the fourth-best selling hip-hop album of all time. His next three albums also proved to be mutli-platinum selling successes, and he had a number of popular singles as well.

Nelly has also done some work in film and television. These included a supporting role in The Longest Yard, a four-episode appearance in CSI: NY and a recurring role in Real Husbands of Hollywood.