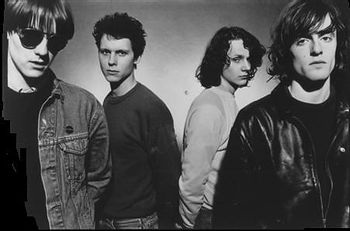 Spacemen 3 are the band Jason Pierce was in before he became famous.

Of course, it's a bit more complex than that. Spacemen 3 were an English Alternative Rock/Psychedelic Rock band active between 1982 and 1991. The band had a largely rotating lineup centered around core members Jason "J. Spaceman" Pierce and Peter "Sonic Boom" Kember. Notably enough, its last lineup included future Spiritualized members Will Carruthers, Jonny Mattock and Mark Refoy.

The band was known for its fanatical focus on minimalism and psychedelia, adopting the motto "taking drugs to make music to take drugs to" (later the name of a compilation). Their sound was based around droning guitars, feedback, monotonous rhythms, Creepy Monotone vocals and extended song lengths. Pierce and Kember shared an affinity for Shout Outs to their favourite musicians in both song titles, lyrics and interviews, with names cited as influences including The Velvet Underground, The Stooges, MC5, Captain Beefheart, Kraftwerk, The 13th Floor Elevators, The Electric Prunes, various blues and gospel acts (Muddy Waters, Bo Diddley, the Staple Singers and John Lee Hooker) and the production techniques of Joe Meek, Brian Wilson and Delia Derbyshire.

The band disbanded in 1991 amid worsening tensions between Pierce and Kember. Their last album, Recurring, reflected this, with the two sides being recorded by the two separately in different studios. Pierce has since gone on to popularity, acclaim and success with Spiritualized, while Kember founded Spectrum, worked as a producer for acts such as MGMT, Panda Bear and Beach House and did... pretty much fuck all weird drone music with Kevin Shields (as Experimental Audio Research).

Opinions on Spacemen 3 tend to be split a few ways. Either: they are just as good as, better than or worse than Spiritualized. There's also the issue of their love of extreme repetition and long jamming.