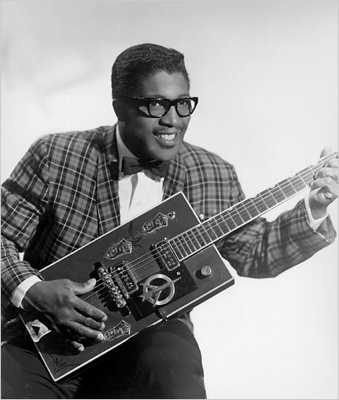 Ellas McDaniel Otha Bates, (born Ellas Otha Bates, December 30, 1928 – June 2, 2008), better known as Bo Diddley, was an African-American Blues and Rock singer, mainly prominent in the 1950s. He was known as "the Originator" for being one of the first artists to start playing Rock & Roll. The Beatles cited him as a favorite, and Jimi Hendrix and Eric Clapton were directly inspired by him.

His most famous contribution was the "Bo Diddley Beat" that rock bands the world over still use. He famously made his own, distinctively rectangular, electric guitars. They have a distinctive, almost ukelele-like tone color, easily recognizable and closely associated with Bo Diddley Beat-type music. Rolling Stone recognizes him as the twenty-seventh greatest guitarist of all time on their list of 100 Greatest Guitarists of All Time.

He also served for some time as a deputy Sheriff. He lived his last years in Gainesville, Florida where there is a park/community plaza named after him. His son was arrested while protesting there.

Tropes having to do with Bo Diddley: