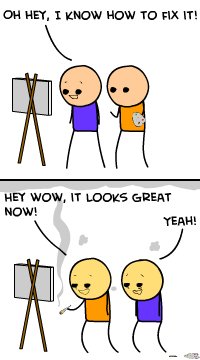 "I don't need drugs to enjoy this! Just to enhance it!"
— Otto, The Simpsons, "'Scuse Me While I Miss the Sky"
Advertisement:

There are works that some people on shows will insist are more entertaining, or make more sense, if you're watching/reading/listening to/playing it while under the influence of a mind altering substance; be it alcohol, pot, acid, mushrooms, ecstasy, or whatever, man. Some people may say every work is better, but in general, there seems to be a select group of works that are claimed to be this way.

This usually happens with works supposedly made when the creators were under the influence of the same substances regardless of their actual sobriety. Most often it's Stoner Flicks that get this or if it just has a stoner character, especially an erudite one. Works that use Faux Symbolism also receive this. It also happens with works that involve swirls of bright colors, strobe lights, laser lights, mushroom sambas, or Disney Acid Sequences. Frequently, the work just has to involve something strange or out of the ordinary, so this is very common with fantasy and science fiction as well as works involving a Mind Screw. Also possible with works that are supposedly aimed at kids but the content calls this into question. Game shows from the 1970s- particularly the original Match Game- also fall under this due to their funky 70s-ness, raunchy humor and feel of intoxication (the way they were taped, the panel that week would often have drinks before the Thursday and Friday shows were taped, so they were under the influence, albeit in a non-pot way).

Whether or not the creators intentionally make it this way varies, as will whether or not they admit to it for several reasons. Doing so can lead to backlash from Moral Guardians and can cause problems for people under Contractual Purity because Drugs Are Bad. However, this can be affected by Values Dissonance which can lead to a Flip-Flop of God. It can also lead to a Misaimed Fandom, which can lead to the aforementioned problems but can also help how successful the work is leading to a Shrug of God.

This is a recurring joke among people who riff/recap/MST horrible movies online.

Often leads to an Alternate Aesop Interpretation, Everyone Is Jesus in Purgatory, or What Do You Mean, It's Not Didactic?.

Generally not recommended with Horror films.

Oddly enough, this only occasionally overlaps with This Is Your Premise on Drugs. However, it almost always overlaps with What Do You Mean, It Wasn't Made on Drugs?

Has nothing to do with watching someone being stoned to death.