Music / Queens of the Stone Age 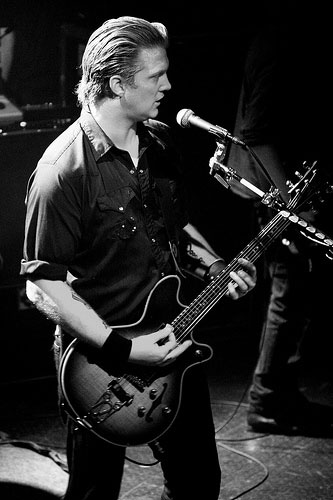 Pictured: Josh Homme, the man behind the band.
Advertisement:

Queens of the Stone Age (often abbreviated as QOTSA) is an American Hard Rock band from the Palm Desert Scene, formed in 1996 by guitarist Josh Hommenote pronounced "hommy" after his previous band Kyuss disbanded.

Originally named Gamma Ray, they were forced to change their name after a threat of legal action from an already existing band. The name comes from a joke made by one of Kyuss's producers, but Homme has since given a different rationale behind it — the name "Kings of the Stone Age" conjured an image of hyper-masculine armored men, but swapping in "Queens" conjured an image of the women who "hang out with the Kings of the Stone Age's girlfriends when they wrestle." It also represented Homme's wider belief that rock should be "heavy enough for the boys and sweet enough for the girls."

The group started out by releasing two split CDs: one of the leftover Kyuss tracks and another with the group Beaver. The new material on those CDs and their first official album, Queens of the Stone Age in 1998, showed Homme slowly breaking away from the musical stylings of Kyuss and coming into his own as an independent musician. However, the group found its identity with the release of Rated R in 2000, a mellower and more varied (but none-the-less hard) mix of stoner rock, grunge/alternative, classic rock and just a touch of heavy metal (with a few unorthodox musical experiments here and there, such as the use of steel drums in one song).

The band solidified their newfound sense of identity with Songs for the Deaf in 2002, which largely abandoned their stoner rock origins in favor of a more accessible sound that garnered them critical acclaim, two Grammy nominations for the songs "No One Knows" and "Go with the Flow" (which also found their ways into Guitar Hero and Rock Band, respectively), and the highest sales of any of their albums to this day.

The group followed up with Lullabies to Paralyze in 2005 (named after a lyric from the track "Mosquito Song" from the previous album) and Era Vulgaris in 2007. While both were given good press and each had a Grammy-nominated song, they were neither as successful or as highly regarded as Songs for the Deaf (although Lullabies was a top-five album, which Songs didn't achieeve).

Homme's other projects and acts he's performed with include Eagles of Death Metal, which he rarely ever performs live with, The Desert Sessions, Fu Manchu, earthlings?, Arctic Monkeys, UNKLE, Lupe Fiasco, and a bunch of other people

After a six-year break, ...Like Clockwork was released on June 3, 2013 to massive acclaim, followed by Villains in 2017.

Homme is also part of the supergroup Them Crooked Vultures with Dave Grohl and John Paul Jones.