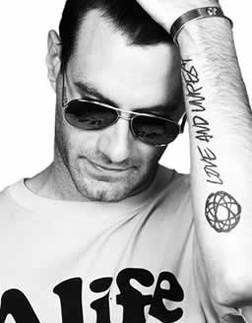 Unkle (also splled UNKLE and U.N.K.L.E.) are This Mortal Coil for the trip-hop genre: a collective of musicians gathered together to record albums by one man who have produced some pretty damn cool work. Said man being James Lavelle, a DJ, producer and the head of the experimental label Mo' Wax.
Advertisement:

Unkle was initially formed by Lavelle and fellow DJ/producer Tim Goldsworthy in 1994, and its first incarnation included such collaborators as the Japanese hip hop crew Major Force, the Beastie Boys keyboardist Mark "Money Mark" Ramos-Nishita and the turntablist collective Scratch Perverts. The collective's first release was the EP The Time Has Come. However, this incarnation quickly collapsed over creative disputes between Goldsworthy, who wanted to pursue an instrumental house music style, and Lavelle, who wanted more conceptual albums with vocals and contributions from hip hop and rock musicians. Goldsworthy left in 1995, leaving Lavelle the sole member of the group.

Having gotten Unkle off to a good start, Shadow left Unkle after touring in support of Fiction. He was replaced by Lavelle's new partner in crime, producer/singer Richard File. For their followup, File and Lavelle abandoned the trip-hop trappings of Fiction and instead pursued a more electronic, ambient style while still keeping their cinematic sound and samples from sci-fi films. Boasting contributions from Josh Homme, Brian Eno, 3D, Jarvis Cocker, Ian Brown and Mani, Never, Never, Land had a more lukewarm reception, with many fans and critics feeling that it didn't really measure up to Fiction. Lavelle and File busied themselves further by creating mix albums under the moniker "Unklesounds" and releasing a compilation of remixes and leftovers from the Land sessions, Self Defense.

File announced his departure from Unkle in early 2008 in favour of his new band We Fell to Earth. Pablo Clements was recruited as Lavelle's foil to replace File. A new studio album appeared in the same year, End Titles... Stories for Film, which combined leftovers from the Stories sessions, soundtrack work and new songs written for the album. The material featured contributions mostly from Stories holdovers (Goss, Homme, Clark), with some new faces present as well (Joel Cadbury, James Petralli, Dave Bateman, the band Black Mountain). Reception was once again mixed but slightly more negative.