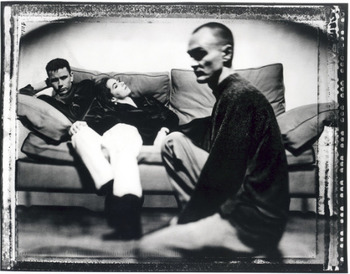 Ivo Watts-Russell had a really good thing going on in The '80s: He was the founder and president of 4AD Records, a key label in the British Post-Punk movement and the main label associated with the Dream Pop genre. And later, he also became famous as the leader of the Dream Pop Supergroup This Mortal Coil.

The latter came about more as a result of random chance than prior plans. One of 4AD's bands, Modern English (yeah, the "I Melt With You" guys), had been playing two of their early songs, "Sixteen Days" and "Gathering Dust," as a medley at the end of their concerts. Watts-Russell suggested they record the medley, with the band saying "no." Undeterred, he decided to do it himself and assembled a bunch of musicians drawn from the 4AD roster including: Elizabeth Fraser and Robin Guthrie (Cocteau Twins), Gordon Sharp (Cindytalk), and a few members from Modern English and Colourbox. The result was an EP under the "This Mortal Coil" name, Sixteen Days / Gathering Dust. The EP's B-Side was a cover of "Song to the Siren" by Tim Buckley, performed solely by Fraser and Guthrie. The latter attracted the most praise and attention thanks to its minimalist production and Fraser's powerful vocals — it peaked at #3 on the UK Indie charts for 101 weeks and was later included on the band's first album.

Pleased with the result, Watts-Russell embarked on the recording of an entire TMC album. As with all TMC material, his role was, in his own words: "a musical director" — he chiefly assembled musicians and chose song material, occasionally playing keyboards. He managed to put together a Dream Team of talented musicians from various bands on the label, with contributions from the aforementioned Fraser, Guthrie, and Simon Raymonde (Cocteau Twins), Martyn and Steven Young (Colourbox), Brendan Perry and Lisa Gerrard (Dead Can Dance), Mark Cox (The Wolfgang Press), Gordon Sharp (Cindytalk), and the only outsider, Howard Devoto of The Buzzcocks. Masterminded by Watts-Russell and 4AD's in-house producer John Fryer, It'll End in Tears set the pattern for all TMC releases: A combination of Cover Versions of cult heroes which transformed the songs into alternately moody and happy Dream Pop, plus original Instrumentals in the same style. Tears was released to a friendly reception from the Post-Punk indie scene and helped further establish Dream Pop as a successful genre.

Watts-Russell and Fryer, technically the only official members of the band, next worked on a new This Mortal Coil album. This lineup included holdovers from Tears like Raymonde, Cox and Steven Young alongside new blood such as Richard Thomas, David Curtis and Alan Curtis from Dif Juz, Andrew Gray from The Wolfgang Press, Deirdre and Louise Rutkowski, arranger/conductor Martin McCarrick and Dominic Appleton from Breathless. A double-album, Filigree & Shadow saw the collective take advantage of the format to expand its musical horizons: besides the obligatory dream pop Cover Versions and instrumentals (which were more lushly produced, featuring more use of string sections), the material was occasionally darker, harsher, more dissonant and haunting, featuring more short experimental tracks, venturing into outright horror and being more influenced overall by Goth music.

After a five year pause, Watts-Russell and Fryer commenced work on another This Mortal Coil album, which Russell had announced would be the last. McCarrick, Appleton, Limerick and the Rutkowski sisters were the holdovers this time, with new contributors including Kim Deal (The Pixies, The Breeders), Tanya Donnelly (Throwing Muses, The Breeders), Caroline Crawley (Shelleyan Orphan), Tim Freeman, Heidi Berry and Anne Garrigues. Another double album, Blood was very much Filigree & Shadow II, splitting its time equally between Dream Pop and Gothic Rock. Blood however had fewer experimental moments and boasted a similarly strong selection of covers, ensuring that This Mortal Coil ended on a high note.

Watts-Russell issued the box set 1983-1991, containing the group's three albums and a bonus disc with the original versions of the songs they covered, in 1993, thus marking the definitive end of This Mortal Coil. He created another project similar to TMC named The Hope Blister in 1998, but this only lasted a year. Watts-Russell sold 4AD Records back to its original distributors, Beggar's Banquet Records, in 1999 and has since retired from the music business.