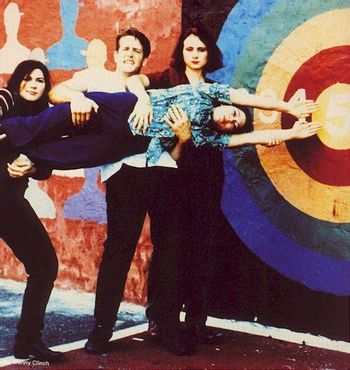 The Breeders in 1994. Left to right: Kelley Deal, Jim MacPherson, Josephine Wiggs, Kim Deal
I know you, little libertine,
I know you're a cannonball.
I'll be your whatever you want,
The bong in this reggae song.
"Cannonball"
Advertisement:

So, what would you do if you're in a band and fans like you, but your frontman gets jealous and starts doing the I Am the Band thing and pisses you off?

Kim Deal's answer: "Start My Own band! And become just as popular!".

The Breeders was started by Kim Deal, the girlish-voiced bassist of The Pixies, as a result of frontman Black Francis' aforementioned jealousy at her Ensemble Dark Horse status and I Am the Band tendencies. She has since remained one of the two constant members of the band.

At first, The Breeders were a collaboration between Deal (who switched to guitar) and Throwing Muses guitarist/vocalist Tanya Donelly, augmented by The Perfect Disaster bassist Josephine Wiggs and Slint drummer Britt "Oh wait, that's a guy?" Walford. In this incarnation, the band got signed to 4AD Records (also home of The Pixies) and recorded an album with Steve Albini, who had worked on The Pixies' Surfer Rosa. The album, Pod, represented a variation on The Pixies' catchy Alternative Rock but with rawer production values, and was well-received upon its release.

After a break to record with their full-time bands, Deal and Donelly returned to the Breeders, this time permanently - Donelly resigned from Throwing Muses shortly thereafter, while the Pixies went on a two-year hiatus and disintegrated. A short Breeders EP followed, Safari. This marked the debut of Kim's twin sister Kelley, who has remained the other constant member of the band since, despite never having played guitar in her life before being hired as The Breeders' lead guitarist. By the end of the year, Donelly and Walford had left the band, the former starting her own band Belly, the latter replaced by Jim MacPherson behind the drumset. With the new Kim-Kelley-Josephine-Jim lineup, The Breeders became a full-time band, supporting Nirvana on their 1992 European tour.

After The Pixies broke up for good in 1993, The Breeders went into the studio to record Last Splash. Produced by Kim and Mark Freegard, Splash has slightly better production values (but not by much) and way catchier melodies. It quickly became the band's biggest success, spawning a hit single with "Cannonball" and selling well in excess of a million copies.

However, this success proved too good to last. The band wound down after Kelley ran into legal trouble for drug use, going into a long hiatus. Both sisters started up side projects, namely The Amps (Kim), the Kelley Deal 6000 and The Last Hard Men (Kelley). MacPherson and Wiggs themselves left at some point during this hiatus. The Prodigy also Sampled Up their song "S.O.S." for the massive hit "Firestarter" while they were inactive.

The Breeders came out of their 10-Minute Retirement around 1998, initially just with the Deal sisters. They returned to the studio with a new rhythm section (bassist Mando Lopez and drummer Jose Medeles) and guitarist to record Title TK, released in 2002. TK shied away from the catchy accessibility of Splash and instead returned to the raw garage rock of Pod. The band released another album and an EP with that lineup, before reuniting the 1993 lineup in 2018.