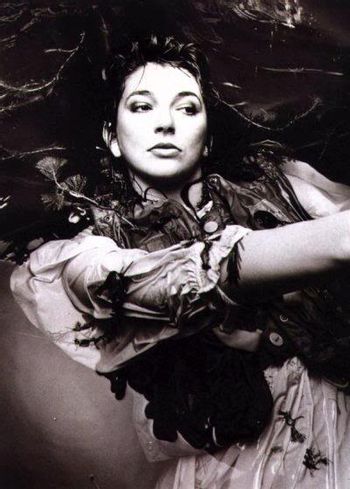 Besides her eccentric music, Bush is known for her unforgettable voice (high-pitched at first, but deepening and arguably improving over the years) and for making music that cannot be shoehorned into one category. Usually, people just label her as "art rock" or "alternative" and call it a day. She has touched many genres, including pop, electronic, jazz, flamenco, rock, waltz, Renaissance, and disco-funk. Her lyrics are another unique aspect of her music, often based on history, films and literature, such as her signature song "Wuthering Heights", which was inspired by the 1970 film and the book.

A musical prodigy, Bush was signed by EMI at the age of 16 after being recommended by Pink Floyd's David Gilmour, who was amazed by her voice and talent as a pianist after a Bush family friend gave him one of her demo tapes. In 1978, at age 19, she topped the UK Singles Chart for four weeks with her debut, "Wuthering Heights", becoming the first woman to have a UK number-one with a self-written song. She later released her debut album The Kick Inside, which proved that teenagers are capable of releasing quality music.

The success of The Kick Inside forced Bush to make a quick follow-up album, Lionheart. It contains one of her most well-known songs, "Wow". She followed up with her first tour, called the Tour of Life, which she was very involved in creating. It was very theatrical, with Bush having a costume change after virtually every single song, dancing onstage and mostly forgoing playing piano. Even though it was filmed, only an edited version is available; one-and-a-half hours were left out, so it could be shown on TV. While it's highly unlikely that the full concert will be released, some performances can fortunately be found on YouTube.

While Bush liked the experience of touring, it was very exhausting to her, and it detracted from her making new music. Combined with the death of lighting engineer Bill Duffield in a stage accident during the tour, the experience led her to refrain from touring again for the next few decades.

When she was making her third album, Bush was exposed to drum machines & synthesizers (especially the Fairlight CMI), which became a part of her sound. In 1980, she released her third album Never for Ever, which included the hit "Babooshka" and was the first album she co-produced. She took complete control of the production in her next album The Dreaming, resulting in it being very loud, percussive, and aggressive, a drastic change from the relatively calm music she was known for. It was initially not well-received, but has been Vindicated by History as one of her masterpieces. Despite its failure, the album managed to establish a cult following in America through airplay on College Radio and MTV (her video for "The Man with the Child in His Eyes" was also one of the first to be aired on the channel).

In 1985, her most famous and revolutionary album Hounds of Love was released. It made her famous in America, and it is considered one of the best albums released by a solo female artist, with its lead single "Running Up That Hill (A Deal with God)" being a major worldwide hit and now being deemed one of the greatest songs of its time. The next year, she released her Greatest Hits Album The Whole Story, which is her best-selling album. She also performed the duet "Don't Give Up" with Peter Gabriel on his own bestselling art pop album, So (1986), which also helped bring her to a wider stateside audience.

Bush continued to make unique music with the release of The Sensual World & The Red Shoes. The latter was accompanied with a short film called The Line, The Cross and the Curve. Kate then took a 12-year hiatus. She took that time to raise her son, and to record her comeback album Aerial, which was very well-received. It sold 1.5 million copies, despite little promotion from Kate. After a contribution to the soundtrack to The Golden Compass, Kate dropped out of the public eye yet again until May 2011, in which an album full of re-recorded songs originally on The Sensual World and The Red Shoes was released. An album of brand new material, entitled 50 Words for Snow, was released on November 21, 2011.

Bush has since passed the torch on to people like Tori Amos, Björk, Lady Gaga, and Florence + the Machine, ensuring that the world will always have creative, eccentric musicians. In 2002, her songwriting ability was recognised with an Ivor Novello Award for Outstanding Contribution to British Music. She was also one of the first musicians to develop a following on the internet through the rec.music.gaffa newsgroup on Usenet.

In 2014, Bush announced she would be doing her first live shows since 1979 with a run of performances at the Hammersmith Apollo in London. The twenty-two concerts, entitled Before The Dawn, sold-out in minutes of being made available to the public, and were critically acclaimed. The concert's live recordings were later made available on CD and vinyl in December 2016.

In 2018, she released the book How To Be Invisible, presenting her song lyrics (chosen by Bush herself) as a collection of poetry.

You can vote for your favourite Kate Bush studio album by heading over to the Best Album Crowner!

Works, people, and other things that inspired Kate's songs: