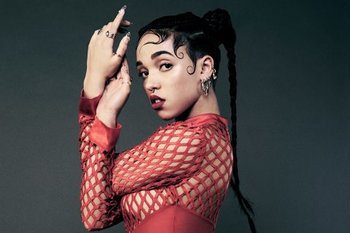 I know it hurts / You know I'd quench that thirst....
Advertisement:

Tahliah Debrett Barnett, born 16 January 1988, who is better known by her stage name FKA twigs, is an English singer-songwriter, producer and dancer originally from Gloucestershire and currently based in London. Her music is like a mix between Björk, Janet Jackson, Sade and Aphex Twin. Or something like that.

Her debut album, LP1, was released under Young Turks in August 2014, and it was one of the most critically acclaimed albums of that year. In 2015, she released M3LL155X, her third EP, accompanied by a short film featuring 4 of the 5 songs in it.