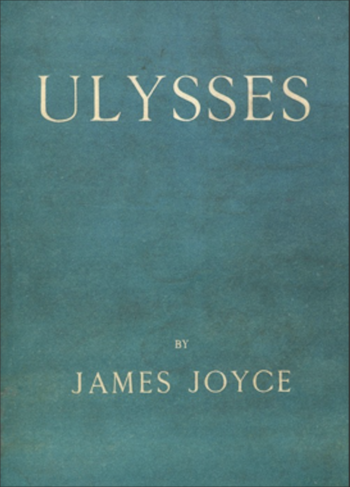 1922 First Edition cover
“It is the book to which all of us are indebted and none of us can escape.”
—T. S. Eliot
Advertisement:

James Joyce’s book, his second novel, was first published in serialized form from 1918 to 1920, then collected in book form and republished in 1922. The actual story can be jotted on the back of a matchbox. Taking place on a single day—June 16th, 1904—in Dublin, Ulysses follows the daily routine of three people: young and jaded would-be artist Stephen Dedalus, passive outsider Leopold Bloom, and his sensual, unfaithful wife Molly. As Stephen and Leopold wander the streets of Dublin, Molly lies in bed all day and cheats on her husband. Eventually, Leopold saves Stephen from a beating at the hands of British soldiers and invites him home to recuperate. Stephen visits his home, but declines to stay the night and Leopold joins Molly in bed.

The treat of the novel is in its style and the rendering of the characters in remarkable detail, often using their direct Inner Monologue, or having their style of thought influence the third-person perspective. Their meals, visits to the bathroom, work, affairs, prejudices, fantasies, are all recorded. Nothing is spared. Every chapter mimics, parallels and/or parodies a section of Homer's Odyssey (for example, Ulysses' battle with the Cyclops becomes the Jewish Leopold debating religion and politics with a raving, bigoted nationalist with a glass eye). Every chapter is also a literary experiment, where Joyce breaks every rule of novel writing.

Joyce’s Ulysses arguably did for modernist fiction what T. S. Eliot’s “The Love Song of J. Alfred Prufrock” did for modernist poetry. Notably, the novel and the poem have quite a few thematic and stylistic parallels, with both featuring a pointedly unromantic protagonist, a lovingly rendered portrait of the modern city, a strong focus on the ongoing process of thought and imagination, and a freewheeling structure that can throw some readers for a loop. Uncertainty and self-doubt are also major themes in both works, and the protagonists of both works even mentally compare themselves to Prince Hamlet.

As of this writing, the novel has been adapted to film twice, with varying degrees of faithfulness. American filmmaker Joseph Strick directed the first adaptation in 1967, which won an Academy Award for Best Adapted Screenplay. Irish filmmaker Sean Walsh also directed a loose adaptation called Bloom in 2003, just in time for the centennial of Bloomsday; boasting an all-Irish cast, the film featured Stephen Rea (of The Crying Game and V for Vendetta fame) as Leopold Bloom, and Hugh O'Connor (best know as young Christy Brown in My Left Foot) as Stephen Dedalus. Tropers of the '80s also might remember the BBC documentary series Ten Great Writers of the Modern World, which dramatized several key scenes from the novel for its episode on James Joyce.note  Memorably, the episode featured Patricia Quinn (Magenta from The Rocky Horror Picture Show) in a cameo as Bella Cohen the brothel madam There was also a successful stage play called Ulysses in Nighttown based on the famously surreal fifteenth episode "Circe", which is actually written as a play in the book (complete with stage directions).

Not to be confused with The Odyssey.

The full novel is public domain, and can be found here

WARNING: This book can drive you mad, and its follow up will.