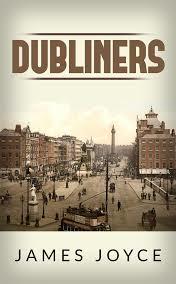 "Yes, the newspapers were right: snow was general all over Ireland. It was falling on every part of the dark central plain, on the treeless hills, falling softly upon the Bog of Allen and, farther westward, softly falling into the dark mutinous Shannon waves. It was falling, too, upon every part of the lonely churchyard on the hill where Michael Furey lay buried."
—Dubliners, "The Dead"
Advertisement:

Dubliners is a 1914 collection of short stories about various residents of Dublin written by James Joyce. It was his first published work and is much less experimental than Ulysses, although still considered a masterpiece, and one of the most famous short story collections of all time. The stories are interrelated, although no one character repeats. But the first three stories and the last one (especially the last one) can be very easily interpereted as being about early versions of Stephen Dedalus, the main character of his first novel, A Portrait of the Artist as a Young Man.

The stories are largely quite plotless, being observational pieces about the people of Dublin and the multiple ways they subtly trap themselves in unhappiness. Joyce's goal was to show Dublin to itself in the hope that he would inspire people to break their self-imposed shackles. He found great difficulty in publishing it due its uncommmercial nature, all publishers asked that he give some stories happy endings, that some be removed for their upsetting material, and that references to to real people and places be removed. When he finally got it published, ten years after he started writing it, it did not sell well. Joyce referred to it as "un fiasco solenne" (an utter failure), a direct reference to the final story, where the Author Avatar worries that the speech he's written will be too high-brow for his audience.

The final story of the collection, and the most famous, "The Dead" was adapted into a critically acclaimed film by John Huston in 1987.

The collection consists of the following fifteen short stories: