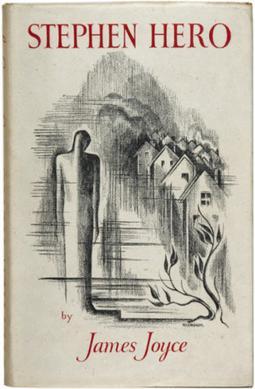 The book Joyce never finished.
Stephen Hero is an unfinished autobiographical novel by James Joyce, which he began in around 1903 and abandoned in 1905. The earliest part of the book is lost, but it apparently covered his childhood and early life; the existing part of it starts mid-sentence when the protagonist, Stephen Daedalus, is a student at University College Dublin, and by the end of the book, Stephen is still a student.
Advertisement:

In the course of the narrative as it exists, Stephen goes to college, pursues a rather half-hearted flirtation with a young woman named Emma Clery, helplessly watches his younger sister die, and spends most of his time having endless conversations with his friends and elders about art, life, religion and family.

The book is mainly of interest today because Joyce grew tired of the way he was writing it, and completely rewrote it from scratch, eventually producing his first novel, A Portrait of the Artist as a Young Man, which is a lot more sophisticated and balanced and a lot less riddled with Author Filibuster than Stephen Hero is. Joyce began writing Stephen Hero while he was living in Dublin, and he did so partly in order to demonstrate to his friends and peers that he was writing a book in which they were characters: there’s a certain amount of score-settling going on in it, which was not helped by his habit of carrying it around with him and showing people the bits that featured characters based on them.

However, as a novel, Stephen Hero is quite conventional, and as such, it’s unlike anything else he ever wrote, except for some of the stories in Dubliners. It has a third-person omniscient narrator who seems to be identical with Stephen himself, in that he knows and sees everything that Stephen knows and sees, and doesn’t ever disagree with him, and Joyce seems to have wanted to fictionalise nearly every important conversation he had and every relatively minor event in his life. As a result, the narrative crawls along and it’s overstuffed with detail.

As Joyce’s biographer Richard Ellmann noted, once Joyce had left Ireland for Trieste, he became less obsessed with settling personal scores and more balanced and reflective about his writing. He would take out a lot of the detail when he came to rewrite the book, slimmed the story down to only a few key episodes in Stephen’s life, and changed the authorial perspective to one that was right inside Stephen’s head—which is why A Portrait is universally regarded as a better novel.

Stephen Hero was not published in Joyce’s lifetime. It eventually came out in 1944, and unlike Joyce’s other works has been in and out of print ever since, being mostly of interest to literary scholars and people who already like his work.