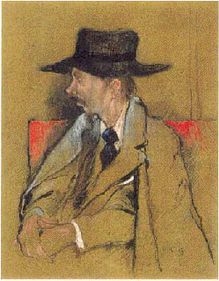 "You aren't an artist," he rasped. "And you're so hopelessly not an artist that, so far from being able to imagine a thing and make it seem true, you're going to make even a true thing seem as if you'd made it up. You're a miserable bungler. And it's like my luck."

is a classic story by Max Beerbohm originally published in 1916, but purporting to recollect events taking place in the 1890's as well as in the "imagined future" of 1997. The story is a Deal with the Devil tale that also incorporates Time Travel and other science fiction elements. For other works by Beerbohm with their own pages, see Zuleika Dobson.

"Try," was the prayer he threw back at me as the devil pushed him roughly out through the door—"TRY to make them know that I did exist!"