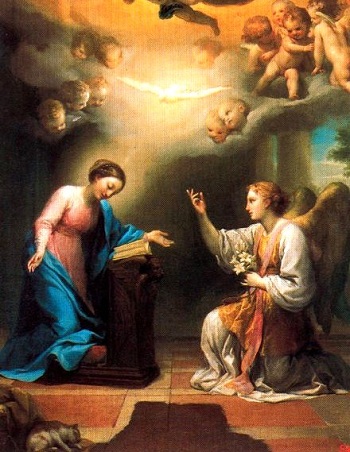 One of the best-known angels (and one of three to be specifically named), Gabriel is the messenger of God. His most famous act was foretelling the births of Jesus and John the Baptist, though he appeared as early as the Book of Daniel in the Old Testament. Because he is explicitly mentioned as the angel who comes to earth to inform the people, in fiction he is often shown interacting with humans, in addition to the higher angels' role as warriors. Many also identify him as the angel of the Last Judgement, and with the Ministering Angel who came to Jesus in Gethsemane. Gabriel, known as Jibril, plays a similar role in Islam (he appears to Muhammad, and the revelations so transmitted are The Qur'an) and the Baha'i Faith. In Latter-day Saint theology, Gabriel is believed to have led a mortal life as Noah.

He (and nowadays sometimes "she") is a Public Domain Character, from The Bible, of course, though his status as an Archangel is never specified in the book itself.

Gabriel has commonly been depicted heralding messages with a horn, so the Horn of Gabriel may show up in fiction quite a bit. Said horn is often granted the epithet "Gabriel's Horn of Truth", and is occasionally seen as being used to herald the coming of the apocalypse itself. Sometimes, instead of a trumpet, he's holding a lily or a cup (representing Mary's purity and femininity). Gabriel himself is strongly associated with Seers, prediction, and clairvoyance in his messages.

Because of Meaningful Names, characters named Gabriel have generally been good guys. However, since angels have largely shifted out of Always Lawful Good territory in contemporary media, the name Gabriel has lost some of its street cred, particularly considering his links to Death and being "The Angel of God's Left Hand". Either way, these characters are Gabriel In Name Only, so please don't list them here.

Also, as reading several of the examples below show, he tends to fill the "angel doing bad, bad things" role quite often these days for some reason.