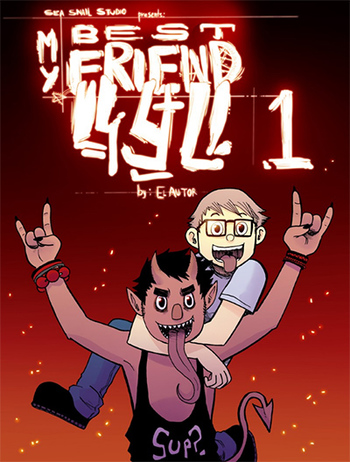 A friendship made in Inferni
Advertisement:

My Best Friend Marneao, is a webcomic written and illustrated by El Autor of Sea Snail Studio, hosted on Webtoons. It started to be published on July, 2016,

Life was pretty lonely for Jacob, a nerdy guy who wanted to have a best friend to hang out with, see his favorite shows, read his favorite manga like Yowamushi Pedal, watch Youtube channels, you know, the usual stuff. So he decided to sell his soul to find the perfect friend! And not just any friend: the son of Lucifer himself, Marnaeo.

Jacob and Marnaeo become the best of friends in a flash, hanging out and having the best days ever!... except that by going to Earth, Marneao broke a lot of laws and made the Right Hand of God, Baraquiel, absolutely livid. Baraquiel made Lucifer send demons to take his son back to Inferni, either dead or alive, Baraquiel doesn't care.

Marneao will have to fight against demons in order to stay with his Best Friend.

My Best Friend Marneao is El Autor fourth series after Salvatore, Adam, and T.Kin Ball, and the first to be published in English. It is a Fighting Series inspired by Shonen Jump works.

You can start reading here.