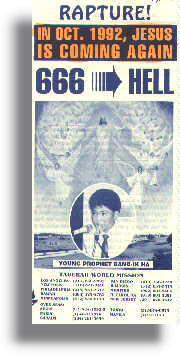 Aw man, I missed it.
"But about that day and hour no one knows, not even the angels of heaven nor the Son, but only the Father."
— Matthew 24:36, The Bible (New International Version), disavowing the contents of this very page.
Advertisement:

Writers are fond of putting precise dates on the Apocalypse. There's really nothing more dramatic than The End of the World as We Know It, but claiming that it will occur just 20 Minutes into the Future isn't quite as dramatic as saying it will occur in precisely Six Years, Eight Months, Seven Days ... and counting.

So one might propose that if all the movies, Video Games and other media depicting the world's destruction were correct, we'd be seeing the world ending at least once a week, and especially on dates that appear numerically significant.

Related to I Want My Jetpack (though in all seriousness, sometimes not even villains want an Earth-Shattering Kaboom).

. And for information about non-fictional predictions, Wikipedia has their own list, too.

where many recent crank predictions can be found.

Of course, the real problem with this page is... if it happens, most of us will be destroyed anyway.

The Earth has already been destroyed on:

The Earth is still scheduled or predicted to be destroyed on:

People in Real Life think the Earth has been/will be destroyed on:

May Happen At Any Moment:

May ALREADY have happened:

I Remember When All This Will Be Again.

Alternative Title(s): Apocalypse Of The Week