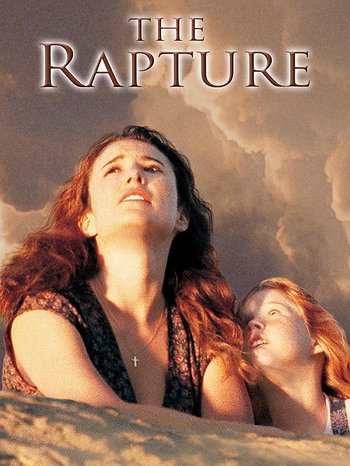 ♫ It’s the end of the world and she don’t feel fine. ♫
Advertisement:

The Rapture is a 1991 Religious Drama film Directed by Micheal Tolkin and starring Mimi Rogers and David Duchovny.

Rogers plays Sharon, a woman in Los Angeles who works in a boring job by day and lives a swinging lifestyle by night. Finding both empty, she is intrigued when she overhears some co-workers discussing the prophesied end of the world, involving the Rapture where true believers will be taken bodily up to heaven. After learning more, she becomes convinced their belief is true, becoming a born-again Christian. She tells Randy, a fellow swinger, and converts him as well. Six years later, the pair are married with a daughter and active in their church. However, tragedy strikes, and Sharon's faith is tested as her world soon begins to unravel...