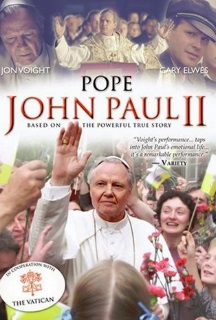 "This is the highest form of resistance: to give hope to those who have none."
—Adam Sapieha
Advertisement:

Pope John Paul II is a 2005 biopic distributed by CBS as a TV miniseries and directed and written by John Kent Harrison.

It covers the life of the 264th Pope, Saint John Paul II (born Karol Józef Wojtyła), the first non-Italian pope in 455 years, from his childhood in Wadowice, Poland through his election to the Papacy in 1978, up to his death in the Holy See in 2005.

It stars Jon Voight as Pope John Paul II, with Cary Elwes portraying younger Wojtyła in the 39 years (1939-1978) leading up to his election to the Holy See. It premiered on 17 November in Vatican City before airing on CBS on December 4 & 7, 2005.