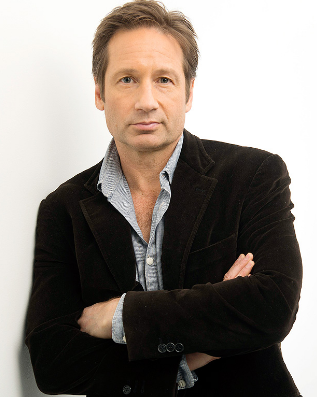 "I've turned down jobs because I've said, 'Honestly, I can't find my way in. I can't do it. I love you, as a director. I think the script is good. You deserve better than I think I can do.'"
Advertisement:

David Duchovny (born August 7, 1960 in New York, New York) is an American actor, writer, director, and producer known best for his role as Agent Fox Mulder on the hit Fox sci-fi show The X-Files. Other notable roles Duchovny has taken are Hank Moody in Californication and Sam Hodiak in the Period Drama Aquarius, the latter of which he also produces.

After an infamous contractual dispute, Duchovny was responsible for moving the filming location of The X-Files from Vancouver to Los Angeles from the show's sixth season on. Duchovny cited being closer to his then-wife actress Téa Leoni as the reason for this move, though after a rocky marriage into the Turn of the Millennium, the couple later divorced in 2014.

He kicked off something of a musical career in 2015 with the release of his first studio album Hell or Highwater, as well as a book-writing career as he has published (to date) four books: Holy Cow: A Modern-Day Dairy Tale (2015), Bucky F*cking Dent (2016), Miss Subways (2018), and Truly Like Lightning (2021).