Film / The X-Files: Fight the Future 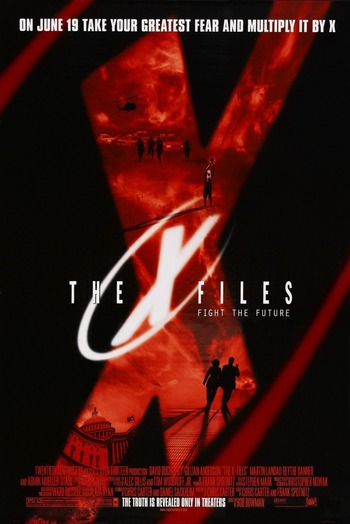 "They've been working on this for fifty years! While the rest of the world have been fighting gooks and commies, these men have been secretly negotiating a planned Armageddon!"
"They put the bomb in the building across the street because it did have federal offices. The Federal Emergency Management Agency had a provisional medical quarantine office there, which is where the bodies were found. But that's the thing... the thing you didn't know. The thing you'd never think to check. Those people were already dead."
— Alvin Kurtzweil
Advertisement:

The X-Files (unofficially at first, then later officially, known as The X-Files: Fight the Future after its tagline) is a 1998 Science Fiction film based on the popular TV series of the same name. Set between the fifth and sixth seasons of the series, it follows the adventures of Fox Mulder and Dana Scully, a pair of FBI agents infamous among their peers for their investigation of cases that defy a rational or scientific explanation. After failing to stop what seems to be a terrorist bombing in Dallas, Texas, the agents are flung into another government conspiracy regarding the colonization of Earth by alien life forms. Mulder and Scully follow the usual labyrinth of paranormal clues and obtrusive bureaucracies, eventually reaching the Antarctic, where the biggest secret of all lies in store.

A second film, The X-Files: I Want to Believe, came out in 2008, though it's a stand-alone story unconnected to this movie or the series' Myth Arc.

The X-Files: Fight the Future contains examples of: