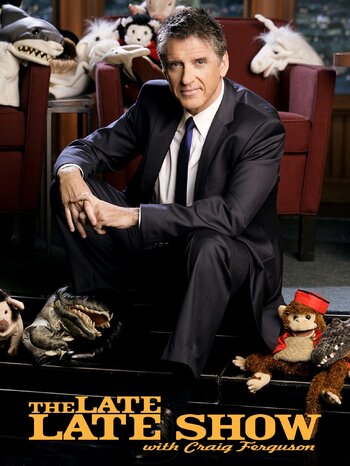 During the late 2004 transition of guest hosts following the departure of previous host Craig Kilborn, Craig Ferguson hosted a series of shows in October and November, culminating in being announced on December 7 as the pick for new host. Since launching The Late Late Show with Craig Ferguson on January 3, 2005, Ferguson achieved the highest ratings since the show's inception in 1995.

Craig was a seemingly unlikely pick at first, since his previous claim to fame was as the prickly Nigel Wick on The Drew Carey Show. Over the next nine years of his tenure, Craig would gradually stand out from the other late-night hosts, using a combination of cheap, low-budget bits and sketches (most famously, his long series of hand puppets, which often opened the show, and one of which hosted the 1000th episode), and ceaseless improvisation. His often self-indulgent style meant that the show had a ton of Running Gags, to the point of making the whole show feel like one big inside joke.

Craig was also notable for a more conversational style of interview than is typical of other talk show hosts, symbolically tearing up his interview cards right before the guest sits down, and preferring to get to know his guests as people rather than simply celebrities promoting a show or movie. Probably the most frequent guests were Kristen Bell - who for some time semi-seriously lobbied to be Craig's sidekick - and Craig's Old Friend, Betty White, who often showed up as an "expert" in a topic of the day (really just an excuse for Craig to be the Straight Man for Betty in a comedy skit).

While comedy was emphasized in the majority of the episodes, Ferguson also addressed difficult subject matters, such as the deaths of his parents, his struggles with alcoholism, and commentating on national tragedies; and undertook serious interviews, such as one with Archbishop Desmond Tutu, which earned the show a 2009 Peabody Award. Craig didn't initially have a sidekick, until comedian and voice actor Josh Robert Thompson joined the show in 2010, as the voice of Geoff Peterson - a robot skeleton, designed by no less than Grant Imahara, as a parody of the typical late night sidekicks. Geoff Peterson would be joined by pantomime horse "Secretariat" - also a parody, this time of the biopic of the real article - and they would be Craig's sidekicks until the show's finale.

On April 28, 2014, Ferguson announced that he was ending the show at the end of the year. The last episode aired on December 19, 2014. Afterwards, Late Late Show began a series of episodes with guest hosts; new permanent host James Corden began his iteration of the franchise on March 23, 2015.

Tropes associated with The Late Late Show with Craig Ferguson include: