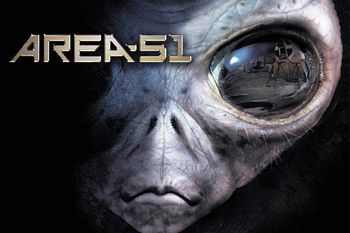 The conspiracy is no longer a theory.
Area 51 is a First-Person Shooter video game on Entropy, an in-house game engine built by Inevitable Entertainment (Midway Studios Austin at the time), and was released on Playstation 2 and Xbox on April 25th, 2005, with the PC version following 6 weeks later on June 8th. Based loosely on the 1995 arcade rail shooter of the same name, the game takes place inside the famous Area 51 research facility in Groom Lake, Nevada, where the release of an alien virus has transformed the majority of the scientists and security staff into insane raging mutants. The player takes the role of Ethan Cole (David Duchovny), a member of a four-man biohazard cleanup team sent into the facility to contain the situation. As the game progresses Ethan is eventually separated from his team and ends up uncovering a massive conspiracy between the world-controlling Illuminati and the alien Greys who crash landed in the New Mexican desert fifty years ago.
Advertisement:

A Non-Linear Sequel, named Blacksite: Area 51, was released in 2007. This time, PC and Xbox 360 versions launched simultaneously, while the Playstation 3 version was delayed for a month. Built on the Unreal Engine 3 (aka the Gears of War engine), Blacksite featured similar themes and gameplay elements to the original game, but took place in a different continuity. This time the player is Aaron Pierce, the Silent Protagonist leader of a 4-man team of Delta Force operators who encounter alien phenomenon during the invasion of Iraq in 2003. Three years later, Pierce and his team are called in to suppress an armed insurrection in the area around Rachel, Nevada, only to discover the town and surrounding environs are crawling with alien lifeforms as well as a small, well-organized army of hostile cyborg soldiers known as the Reborn. Blacksite is infamous for being an Obvious Beta that was rushed out into publication before being properly finished. Which contributed to the game's mediocre reception, which combined with Midway crashing and burning a year later, makes further entries into the series rather unlikely for the near future.

The PC version of the 2005 game is available as a freeware download thanks to a partnership Midway made with the US Air Force, and, thanks to a patch that came later, it is now DRM-free.