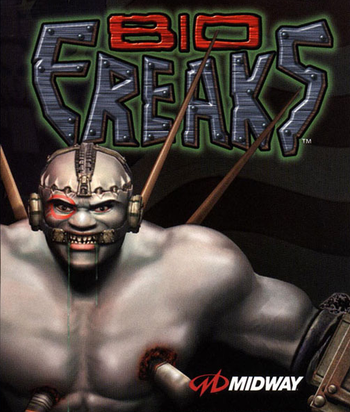 Bio F.R.E.A.K.S. is a 3D Fighting Game from Midway Games, released in 1998. Originally set to be released for the arcades, it received a limited test release in selected arcades, although lukewarm reception meant it was never put into full production. It later received a wide release for the Nintendo 64 and PlayStation instead.

In the not-too-distant future, The United States fell like all great empires throughout history. Fifty states were broken into private territories after the Techno-Industrial Civil Wars. Technology and bio-engineering accelerated at such an incredible rate, and forced an industrial competition of corporate espionage. The government tried to keep control of the country by a single thread, the effect of the giant corporations' ("GI-Corps" for short) white collar wars drove the economy into a tail spin. Neo-Amerika rises as the result of the government bankrupt and technological company takeover.

To maintain order, The Secret Games Commission (SGC) is formed to organize tournaments deciding which organization gets to control all of Neo-Amerika, leading to the creation of Biological Flying Robotic Enhanced Armored Killing Synthoids (Bio F.R.E.A.K.S.) serving as the champions for each participating organization.

Technically, the gameplay features six buttons: two punches, two kicks, shooting and jetpack. Choose from eight different characters, each one gets equipped with a Weapon of Choice. Also, just like Time Killers, characters can get mutilated in the middle of fight and then finish with decapitation or cutting in two halves.

The game received mixed reviews. Some considered it awesome, with Visual Effects of Awesome, different gameplay mechanics and Awesome Music, while others criticized the whole jetpack concept as more of a chasing function than a fighting strategy, and the fact that the shooting attacks ruin the pace of gameplay, not to mention the bad voice acting.

These are the tropes featured in Bio F.R.E.A.K.S.: