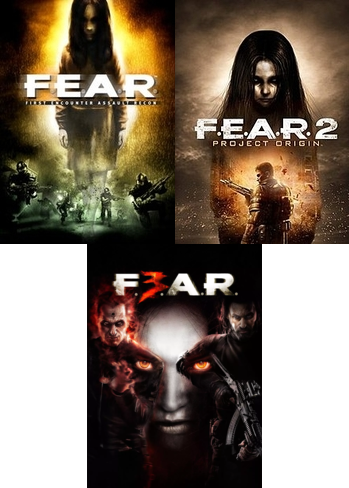 Now do you know the true meaning of FEAR?
"There are plausible scientific explanations for everything that followed, but I think it was really just a question of hatred. It is the way of men to make monsters; and it is the nature of monsters to destroy their makers."
— Harlan Wade
Advertisement:

First Encounter Assault Recon (F.E.A.R.) is a special operations unit working for the United States government. Their purpose: to deal with paranormal threats to national security.

As the game starts, the player takes on the role of F.E.A.R.'s new Point Man. In his first briefing, F.E.A.R. learns of a secret military project, Perseus, being run by Armacham Technology Corporation in the city of Fairport. The project, the development of a battalion of telepathically controlled "Replica" Super Soldiers, has gone haywire. The Replica battalion's telepathic commander, an unstable operative named Paxton Fettel, has led them in an uprising. It is now F.E.A.R.'s job to hunt down and kill Fettel, ending the uprising. But things start to get complicated when Alma, a little girl in a red dress, shows up and starts annihilating F.E.A.R.'s 1st SFOD-D ("Delta Force," a real-life U.S. military special operations unit) escorts, then vanishes. It's now up to the Point Man to find and kill Fettel, but this proves to be a much more difficult task than originally envisioned as Alma begins to harass Point Man for unknown reasons.

F.E.A.R. is a First-Person Shooter set up as a horror movie, which released in October 2005. The player must survive long enough to unravel the secrets of Project Perseus and its parent, Project Origin, while battling the Replica forces, ATC security teams and experiencing increasingly disturbing visions. It is not a Survival Horror game, however, but a near-future sci-fi action game with strong horror elements. The main element of the gameplay is the slow-motion reflexes feature. At will, the player can slow down time for about six or so seconds before time returns to normal. In it, you can aim and fire much faster than your enemies can, but your low health means that frontal assaults with this tactic is discouraged. Instead, the game incentivizes Hit-and-Run Tactics, which are facilitated by the Replica's deceptively intelligent and persistent A.I, and their abilities to adapt and coordinate with one another on the fly. Couple this with the fact that most of the game's shootouts take place in cramped, enclosed environments, and you get one deadly game of Cat and Mouse.

Two mostly non-canon expansions, Extraction Point and Perseus Mandate, were released just about one and two years after the original game. The former chronicles the Point Man's efforts to escape the city following the events of the main game, while the latter concerns a second F.E.A.R. team's attempts to secure sensitive information about Project Perseus near the end of the original game. Extraction Point was originally exclusive to PC, but was later ported to Xbox 360 as a bundle with Perseus Mandate, which launched simultaneously on both platforms, as F.E.A.R. Files.

The sequel, titled F.E.A.R. 2: Project Origin, was released in February 2009. In this game, the player controls a Delta Force operative named Michael Becket, who is sent to capture Genevive Aristide, CEO of Armacham Technology. Things get worse. Becket undergoes a brutal surgery and experimentation that leaves him a target for Alma, who hunts him down while he himself tries to evade ATC troops and Replica soldiers in order to destroy Alma for good.

The Downloadable Content F.E.A.R. 2: Reborn was released in September 2009. In this DLC, the player controls a Replica called Foxtrot 813, who goes rogue after an encounter with the ghost of Paxton Fettel, slaughtering his entire squadron while hallucinating that they are dangerous creatures trying to kill him.

F.E.A.R. 3 (written as F.3.A.R. in some ads) was released in June 2011. The story opens nine months after the events of F.E.A.R. 2, with the Point Man being interrogated in an Armacham prison. Paxton Fettel appears, and the two stage an escape, with Fettel accompanying his brother back to the warzone that Fairport has become.

A Korean-developed free-to-play game, F.E.A.R. Online, was released by Aeria Games in October 2014. The game used the F.E.A.R. 2: Project Origin engine and had a Combat Arms-style free-to-play model with a crafting system and a number of weapons, items, and characters that could be purchased with in-game gold or real money. The game featured both PVP (team deathmatch and various other modes), and a 4-player co-op mode taking place immediately after the ending of F.E.A.R. 2, featuring a team of Delta Force operatives fighting their way through Fairport in the wake of Dark Signal's failed attempt to stop Alma. It was shut down in May 2015 due to poor reviews and a lack of support.