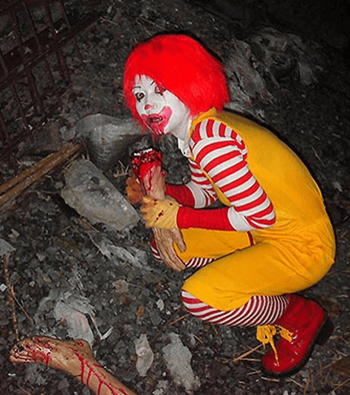 The heroes are looking for something suspicious. Possibly a murderer.

They find him busy at work on his grisly deed, but he perks up and notices our heroes.

Bonus points if the murderer is having lunch in the process.

This is pretty much always shot from behind the murderer for dramatic reasons—it partially obscures the victim, lending ambiguity and tension to the scene and helping the audience's imagination to fill in the grisly details. May involve a Face-Revealing Turn.

Alternative Title(s): Murdering Over My Shoulder