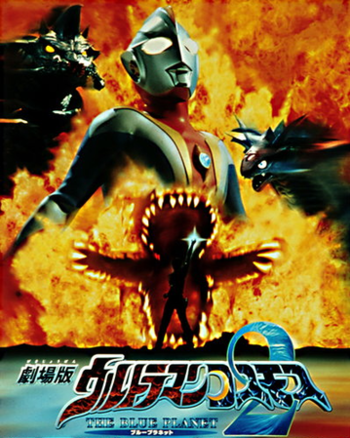 A year after the defeat of the Chaos Header, Haruno Musashi is now an astronaut. On a routine mission to Planet Juran, Musashi discovers the planet has been destroyed, all life on it wiped out, before he was suddenly attacked by a giant insectoid kaiju. After a quick rendezvous with Ultraman Cosmos, Musashi returned to Earth, where a gathering with friends for a wedding is suddenly interrupted by an invasion from the same kaiju species which attacked him in outer space earlier. The discovery of an underwater population of alien beings, and an impending threat to humanity's existence, will have Musashi bonding with Ultraman Cosmos once more to save this beautiful blue planet…

Tropes regarding characters from the movie are already documented on the series' regular character pages.