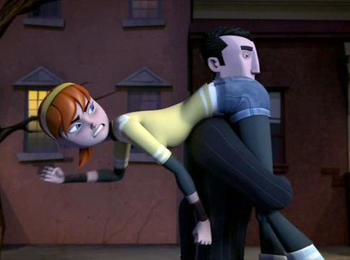 April has a habit of getting carried away.
Advertisement:

Over-the-shoulder carrying (abbreviated OTS) is a method to transport another person. The person is laid face down over one's shoulder with their upper body to the rear. The person's legs are held at the hollow of the knees to secure them. This position allows for relatively easy transportation, even if they are the same weight as oneself. It can be a humiliating pose for the person being carried, since they're turned into a passive object, with their face down and buttocks pointing up and to the front (which, depending on the camera angle, also makes it a potential source of Fanservice).

When this happens in fiction, usually (but not always), it involves an antagonist carrying a Damsel in Distress or other captive that they have caught or subdued. Expect such a victim, if conscious, to scream, curse, and make lame attempts to punch the abductor. On the other hand, this method is sometimes used by a hero character as a way of rescuing/evacuating an injured or unconscious victim from a dangerous area, since it allows them to be slightly more mobile than they would be using other carry forms like Bridal Carry, and it leaves one hand free for doing things like opening doors or wielding a weapon. Sometimes in media where males Wouldn't Hit a Girl the interfering female is "neutralized" from the situation by being carried away in this fashion by a support male character when a female available to oppose her isn't available. This can also happen in non-combat situations where a female is trying to make her presence known or is otherwise impeding progress. Compare Neck Lift and Hoist Hero over Head, which are other ways a villain shows of their strength by lifting up a victim.

Sometimes called the Fireman's Carry, although this is actually the name for another position where weight is supported on both shoulders and the carried person is held by both legs and whichever arm is draped over the carrier's shoulder.

Depending on the context and because of position of the person being carried, they may be subject to Pain to the Ass or a Flirtatious Smack on the Ass. The latter more common if the said person being carried with her buns facing forward is The Chick.

Note that this position (as well as the Fireman's Carry) is often recommended against - it tends to worsen any spinal injuries sustained, and can asphyxiate people in a burning building.

This trope is often performed effortlessly to highlight super strength, or above average physical capabilities. This is always the case when females do this to males, since it occurs less frequently and often highlights physical prowess to match enhanced attractiveness of said female.