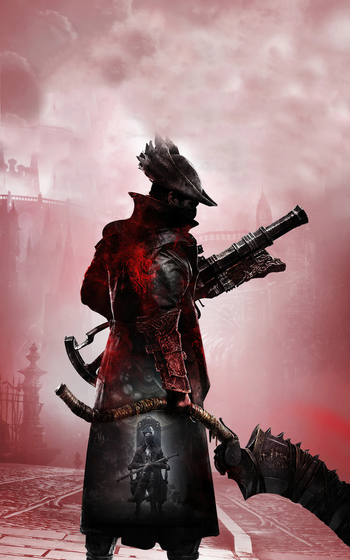 Hunt Your Nightmares.
"And so the nightly hunt begins..."
Advertisement:

Bloodborne is a 2015 Dark Fantasy/Gothic Horror Action RPG on the PlayStation 4 developed by FromSoftware with support from SCE Japan Studio. It is directed by Hidetaka Miyazaki, of Demon's Souls and Dark Souls fame.

Hidden amongst the furthest reaches of the treacherous eastern mountains, the city of Yharnam lies in seclusion. Forgotten. Cursed. An affliction has plagued the city for countless ages, a nightmarish epidemic known only as the beastly scourge. Those afflicted lose all sense of reason, transforming into deranged mutants and monsters. Night after night, "Hunters" arise to cleanse the streets of these horrors.

You are an outsider to the city, seeking a cure for a mysterious disease. However, after a blood transfusion at a local clinic, you pass out and awake to a nightmare of blood, plague and death. Your only hope of escape is to serve as a Hunter yourself, and descend into the depths of the ancient city to hunt the beasts and madmen that lie within.

The game owes much to its predecessors; the basic gameplay and storytelling style are nearly identical to the Souls games, but where those titles encouraged caution in battle, Bloodborne rewards a more aggressive approach. Shields, ubiquitous in Souls, are extremely rare; firearms are the typical offhand gear, and enemy attacks can be interrupted with well-timed shots. If the player takes damage, a "Rally" mechanic gives them a short window of time to heal by attacking enemies.

An Expansion Pack, The Old Hunters, was released digitally on November 24, 2015, with retail bundles released in Europe on November 25 and in Japan on December 3. The expansion is set in a unique nightmare world, the Hunter's Nightmare: a mirror of Yharnam where the blood-drunk Hunters of the city's past are forever trapped and engaged in an endless hunt. The DLC also adds new weapons, special Runes to boost the utility of both old and new weapons, and new enemies and bosses.

In 2018, Titan Comics began publishing multiple four-issue limited series comics based on Bloodborne, all written by Aleš Kot and illustrated by Piotr Kowalskia. The first series is titled The Death of Sleep and focuses on a nameless Hunter charged with protecting a strange child. The second series, The Healing Thirst, follows a doctor and a Healing Church priest as they investigate the Ashen Blood epidemic plaguing Old Yharnam. The third series, A Song of Crows, depicts the past of Eileen the Crow, a character from the game. A fourth series, The Veil, Torn Asunder, has also been announced.

Just go out and kill a few beasts. It's for your own good.
Feedback