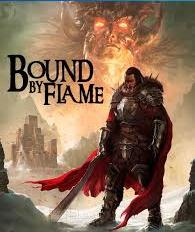 Bound by Flame is a Dark Fantasy Action RPG developed by Spiders and released for all platforms on May 9th of 2014. Set on the continent of Vertiel, the story kicks off when a group called the Red Scholars attempt to build a mysterious artifact to help them defeat the seven Lords of Ice and their Deadwalker army. However, the ritual goes wrong and a mercenary named Vulcan finds him/herself possessed by a fire demon. Vulcan's possession forces players to choose between allowing the demon greater control in exchange for its infernal powers, or rejecting its influence and developing heroic skills on their own. The longer the game goes on, the greater threats become and the choice between giving in to the demon's influence becomes tougher. A choice-based game, how much influence you allow the demon to gain will affect Vulcan's relationship with companions as well as which missions are available to the player.