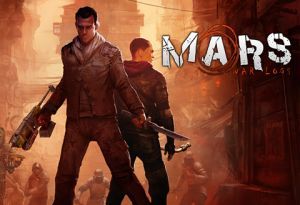 Mars: War Logs is a cyberpunk/space opera Western RPG developed by Spiders and published by Focus Home Interactive for PC, PS3 and Xbox 360 in 2013. Two centuries after the colonization of Mars, an event known as The Turmoil destroys much of the progress humanity has made in taming the red planet’s harsh landscape, ushering in a new Dark Age. Seventy years later, two of the surviving city states, Aurora and Abundance, are engaged in a bloody civil war that is exacerbated by greedy corporate interests intent on monopolizing the planet’s water supply. Amidst this backdrop, Auroran POWs Roy Temperance and Innocence Smith plot a daring escape from prison. Upon returning to Aurora, they become embroiled in a power struggle against its power mad dictator.
Advertisement:

A sequel, The Technomancer, was released on June 29, 2016. The Technomancer takes place concurrent with the events of Mars War Logs and focuses on an Abundance Technomancer named Zachariah, who is trying to find a way to reestablish contact with Earth while being pursued by Abundance's totalitarian Secret Police.