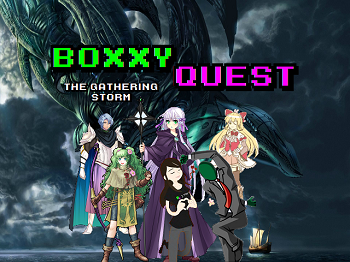 BoxxyQuest: The Gathering Storm is a semi-satirical PC Role-Playing Game made in RPG Maker XP by SpherianGames, in collaboration with voice actress and former YouTube star Catherine Wayne, and the second game in the Boxxy Quest duology, after BoxxyQuest: The Shifted Spires. It tells the story of a girl named Catie, (both named for and voiced by Wayne), and her adventures within the internet.

As in the first game, the internet is a fully-immersive virtual world, where websites are portrayed as cities locked in various petty political struggles. However, when an unknown force begins wiping sites and turning users into glitched, zombie-like abominations, the internet’s leaders must attempt to settle their differences and fight back. Catie, as the queen of a small forum, is on her way to the peace conference when her ship is boarded (and swiftly wrecked) by a mysterious girl called Arianna, the Mangled Avatar, who seems to exist in the shadow of a perpetual storm.

What follows is a quirky, bizarre, and sometimes deeply moving journey across virtual reality, as Catie and her friends race to stop their world from unraveling. Far from being a shallow YouTuber fangame, BoxxyQuest is a lengthy epic filled with surprises and secrets, mixed with some truly fantastic writing and worldbuilding.

It’s also the sequel to BoxxyQuest: The Shifted Spires, the developer’s very first project from back in 2012. However, rather than seek that one out, new players are officially encouraged to start with The Gathering Storm. A summary of the first game’s plot is included in the rpgmaker.net version's files, and somewhere

on Steam to help prevent any kind of Continuity Lockout.

After several limited-release demos on Catie Wayne’s website, BoxxyQuest was released as a full game on itch.io

in September 2018, and is also available on Steam as of May 8th 2020. It is entirely freeware. A full walkthrough can be found here

In November 6, 2021, a DLC chapter taking place in the post game was released, and a patch can be downloaded here

. It opens up two new areas- Newgrounds and Etsy- and concerns a nefarious plot by the Social Justice Warriors, a group of minor villains from the main game, who have kidnapped two villages of Furries and taken over Newgrounds. Catie and her party must stop their misdeeds. In addition is a collection-based side quest where you can collect various lost plushies and turn them in for a reward, and even buy your own house in Etsy, decorating it and the yard.

The Gathering Storm has examples of: