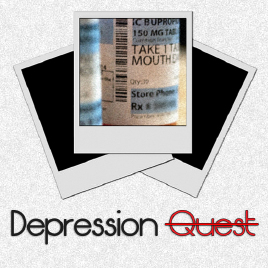 Depression Quest is an Interactive Fiction Adventure Game developed by Zoe Quinn. It was playable for free on its own website,

but was released on Steam

You play as someone living with depression. You are given a series of everyday life events and have to attempt to manage your illness, relationships, job, and possible treatment. These are reflected as answers on a multiple choice questionnaire.