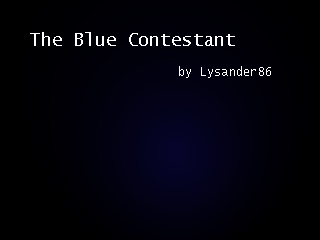 The Blue Contestant is a 2003 freeware game for PC, made in RPG Maker by Lys86, better known for A Blurred Line.
Advertisement:

It is a short story, which begins with the main character writing a letter to a certain Andrea about the virtual reality show they both took part in many years ago. He was the titular Blue Contestant, and the task simply consisted of reaching the goal first, fighting virtual monsters and collecting money icons on the way. These could either be carried all the way to the finishing line to be converted into real money, or spent on items and equipment. The show also included the class system, letting the players switch classes at any time, as long as enough Class Points are available to make the switch. Unfortunately, things escalate soon, and though Blue survived, he’s now mortally ill many years later, an illness somehow connected to what occurred during the show that day…

The Blue Contestant provides examples of the following tropes: