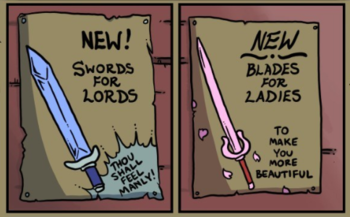 A sword is a sword is a sword. You can paint a sword pink and call it a girl's sword, but there's nothing stopping a boy from picking it up and swinging it at the nearest baddie's head, right?

Sometimes, gear is restricted by gender. Want to equip that status-protecting Ribbon? Better have a set of ovaries. You'd think that adventurers of the "wrong" gender would rather suck it up and cross-dress if it meant a battlefield advantage, but the restriction appears to be magically enforced, if it's mentioned at all.

If one gender's gear is demonstrably superior, this can lead to Game-Favored Gender. Compare Gender-Restricted Ability and Gendered Outfit (either sex can wear clothing, but it looks different depending on which). Contrast Purely Aesthetic Gender and One Size Fits All. A subtrope of Level-Locked Loot, and by extension Phlebotinum-Handling Requirements.