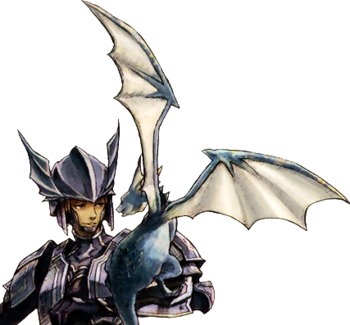 "Who's the cutest little Smaug?
You are! Yes you are!"
Dragons were now in danger of becoming too familiar, even cozy. One sign the dragon was in trouble as a true monster, even threatened with terminal decline, was the appearance of the cute “shoulder dragon” — a creature with all the traditional attributes of dragonkind except size and convincing ferocity.
— GURPS Dragons
Advertisement:

In folklore, both Eastern and Western dragons are invariably gigantic. In modern fantasy, however, it's common to see miniature draconic creatures as well. These are usually around the size of crows or hawks, but otherwise resemble standard Western dragons. They can almost always fly, but they may or may not be able to breathe fire and/or use other magical abilities, and like their larger cousins, they may or may not be sapient and able to speak. They're mostly harmless and usually rather cute — Reptiles Are Abhorrent almost never applies. Settings that have these critters usually have full-sized dragons as well; occasionally, the Shoulder-Sized Dragons may even just be ordinary dragon hatchlings that have not yet attained their full size. More commonly, though, they're a separate but presumably related species, not unlike the relationship between house cats and big cats. Indeed, they'll often act like cats themselves, even doing things like purring when happy or arching their backs when upset.

Why? Well, when it comes to Badass Adorable Non-Human Sidekicks, it doesn't get much better than a pint-sized version of Smaug. In any work where these creatures exist, one of them will be kept by a major character as a pet, Familiar or Bond Creature. The trope name comes from the fact that they are almost invariably found perching on their human companion's shoulder in the Parrot Pet Position. When sharing a universe with Dragon Riders, these guys can even be depicted as Instant Messenger Pigeons.

As far as we can tell, the Ur-Example of this trope is found in Ursula K. Le Guin's 1968 novel A Wizard of Earthsea, in which tiny "dragon-lizards" that can be tamed as pets appear briefly. The Trope Maker, though, is probably Dragonquest by Anne McCaffrey, published three years later, in which the Shoulder-Sized Dragons play a much bigger role.

Subtrope of Our Dragons Are Different and Cool Pet. See also A Boy and His X and Loyal Animal Companion, as well as Fun Size, Fairy Dragons and Catlike Dragons.