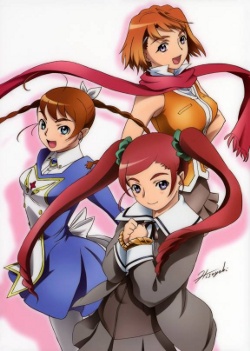 A multimedia franchise created by Sunrise, based primarily around playing with the Magical Girl genre for all it's worth. A major theme is the subversion of the very purpose these "magical" girls are given their powers for, and "ordinary" people trying to exploit them to further their own agenda.

The series is probably best-known for its odd and at times deliberately controversial animation and storytelling, most notoriously unpredictable tonal swings and bizarre denouements, features which have made it one of the most textually multifaceted (or overextended) offerings of the Magical Girl genre (with the original My-HiME being perhaps the genre's first true 'problem piece' since Revolutionary Girl Utena).

As of this writing, there are three major branches, or alternate universes, in the franchise. While the character designs and even names of the characters highly overlap between them, the characterizations of the cast are often completely different, and every universe has its own main protagonist.

Takes place in the Present Day, with New Transfer Student Mai Tokiha as the lead; her name forms one part of the multilayered bilingual pun that is the series name My-HiME. It centers around Fuka Academy and the HiME, girls with strange birthmarks, suddenly-awakening powers, and only vague directions of what to do with them until the time comes. And when it comes, the reasons for the HiME's existence and the Powers That Be behind them suddenly turn out to be far more malevolent than they originally suspected.

Spinoffs: the My-HiME manga, video games, and... basically the rest of the franchise in its entirety, since this was the original.

Set in the distant future on the Lost Colony planet Earl, After the End (although the society has more or less recovered). Arika Yumemiya, a naive Country Mouse, travels to the prestigious Garderobe Academy, aspiring to become an Otome — a superpowered bodyguard for one of the world leaders — only to discover not long afterwards what being an Otome really entails: a Person of Mass Destruction used as a political safeguard against wars, much like nuclear weapons of today, but sometimes, when wars do break out, having to fight her former friends in deadly duels. And then we meet the powers who try to use the Otome system for their own means, everything goes downhill from there, and each one of the three main characters discovers unsettling truth about her own origins...

This is the premise of the My-Otome TV series, which itself has its fair share of spin-offs:

With no anime set in this continuity, this is the territory of the Mai-HiME Destiny light novel series. It keeps the setting (Fuka Academy) and characters of My-HiME, but shuffles them around in different roles and introduces two brand new main characters, Mayo Kagura and Shion Tennoji, while Mai is nowhere to be found. These two eventually underwent "otomefication" in much the same way as the My-HiME cast itself and, in S.ifr, joined the My-Otome anime continuity under different names.