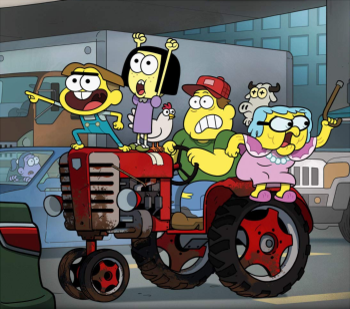 A character from a rural location finds themself as a Fish out of Water in the Big City.

Often quiet and humble, or, alternatively, loud and eager to prove themselves that they can learn the ways of the urban life. Those characters are sometimes depicted as having an inherent superiority in morality, ethics or common sense compared to the "city-tainted" people around them. Can be an authorial voice to deliver An Aesop, or to provide a contrast to the "sophisticated" city-dwellers with whom they live and/or work with now.

Small Town Boredom is sometimes what motivates these characters to travel to the city. On their first arrival there, they will be dazzled by the luxury of city life. Welcome to the Big City or discovering the shallowness of the Life of the Party will soon cure them; from this point on, they will either wisely head back to the countryside, or become corrupted by all the metropolitan consumerism, disease, violence, etc., going on.

No relation to the Nice Mice, although Dogs Hate Squirrels can be invoked if both Country Mouse and Rich Bitch are portrayed as both Nice Mouse and Psycho Poodle respectively.

Compare with City Mouse, Country Cousin and The City vs. the Country when this is an actual plot. Contrast Rich in Dollars, Poor in Sense. Compare and contrast the Half-Witted Hillbilly, the more negative version of this trope.

This term and City Mouse derive from Aesop's Fables, making it Older Than Feudalism.

Not necessarily experienced in Country Matters.