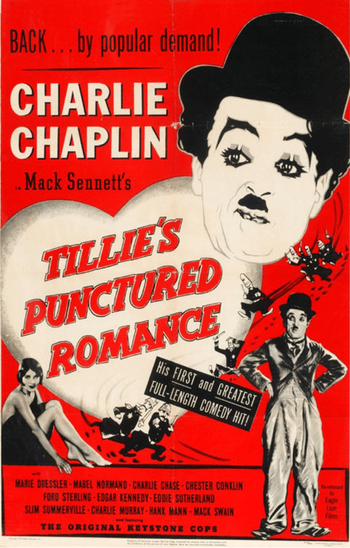 It was based on a play starring Dressler, Tillie's Nightmare. In the film Chaplin plays a sleazy city slicker who stays the night at a farm. When he sees that the farmer has a large bankroll, he romances the farmer's daughter, the large, homely, not terribly bright Tillie (Dressler), and gets her to steal her father's bankroll and run away with him. Once they reach the big city he gets her drunk, steals the wad of cash, and rejoins his sexy girlfriend (Normand). An abandoned Tillie takes a waitressing job, but it turns out that the simple farm girl has a very, very rich uncle. And that uncle is promptly reported dead, lost in the mountains while he was on a vacation, leaving Tillie the heir to a vast fortune. This gets the city slicker interested in Tillie again.

Tillie's Punctured Romance spawned three film sequels, all of which starred Dressler. At 74 minutes long, it was not just the first feature produced by Mack Sennett's Keystone Studios, it was the first feature-length comedy made by anyone anywhere. Comedies in fact would remain almost all short films for several years to come. After Charlie Chaplin left Keystone and assumed control of his own career, which happened not long after this film, he would take six more years before making his own first feature, The Kid. As for this film, Tillie's Punctured Romance is Chaplin's feature film debut and the last time he appeared in a film directed by someone else, with the exception of a couple of As Himself cameos.