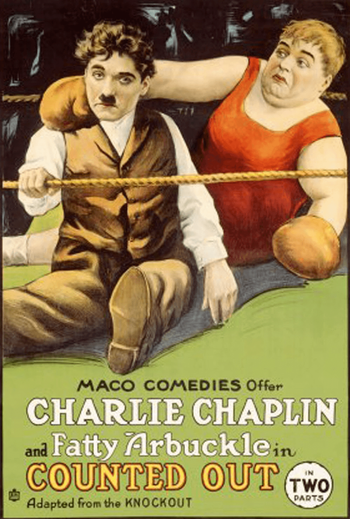 The Knockout is a 1914 Slapstick Farce starring Fatty Arbuckle and directed by Mack Sennett. Fatty stars as Pug, a big guy with a pretty girlfriend. Pug sees some ruffians making unwelcome advances on his girlfriend and fights them off. This gets him volunteered for a boxing match against professional "Cyclone" Flynn, who is taking on all comers. Two hobos who rode in on the train have an idea to impersonate Cyclone Flynn and score some easy money. They propose to split the purse with Pug if he lies down. But then the real Cyclone Flynn shows up and poor Pug finds himself fighting a professional boxer. Pug is getting the worst of it in the fight, until he steals a pair of guns from a spectator and turns the tables on Cyclone Flynn, going on a long, silly chase that forms the climax of the movie.

Not to be confused with Knockout.