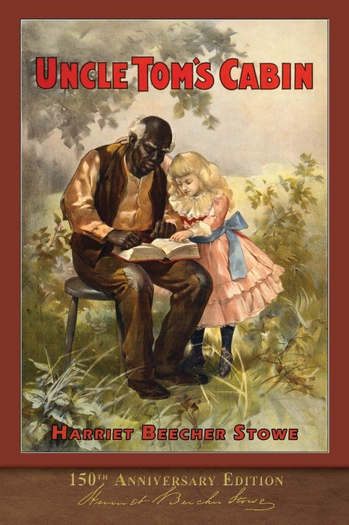 Uncle Tom's Cabin is a classic anti-slavery work written by abolitionist Harriet Beecher Stowe in 1853, a decade before The American Civil War. It was ferociously controversial in its day.
Advertisement:

At the opening of the story, Uncle Tom, Eliza, and her son Harry are all living relatively happily on a large farm in Kentucky. They have a good and kind master, Mr. Arthur Shelby. Tom is a well liked and trusted manager of the farm and is raising his family with his wife, Chloe. Eliza has a relatively easy life, living in the house as Mrs. Shelby’s servant and is allowed visits from her husband, George, who lives on a nearby farm.

Then Mr. Shelby gets into debt, and a slave trader gets his hands on a mortgage on the farm. He proposes to settle the debt with Mr. Shelby in exchange for his best slave. Uncle Tom is sold to the trader who will then sell him "down the river"note slang for "being sold to masters further in the South, where conditions were generally harsher". Little Harry is included in the deal, and his mother happens to eavesdrop on the conversation. Rather than have her child ripped from her, Eliza scoops him up and makes a run for freedom. She tells Tom and Chloe about everything she heard and Chloe urges Tom to go with her. Tom refuses to go on hearing that his sale will fix Shelby’s financial woes, else he will have to break up the farm and sell all the slaves. Knowing his suffering will save the others, Tom resigns himself to his fate and Eliza slips off with Harry.

Eliza makes a daring escape across the Ohio River and lucks into the care of the Underground Railroad. She and Harry make the dangerous trip North, all the while hoping to find her husband, George, who told her his intent to run away from his cruel master and flee to Canada, where he plans to work to buy her and Harry’s freedom.

Tom is bought by Augustine St. Clare after saving the life of his daughter, Evangeline. Tom is taken to live on their estate in New Orleans, and sends word home that he is safe and with a good family. Chloe and Mrs. Shelby resolve to raise the money and buy him home. They calculate it should only take about… four years.

For several years, Tom is happy with the St. Clares and patiently awaits the day he can return home. In the meantime, his Christian love and kindness touches everyone there. Augustine resolves to set Tom free, but before the papers are drawn up, tragedy strikes and the entire estate is broken up and sold off, including the human assets.

Tom ends up in the hands of the vicious sadist Simon Legree, who soon becomes determined to break Tom's Christian spirit or kill him in the attempt.

Stowe wrote this novel as an indictment of slavery. She uses Sarcasm Mode heavily, reminding readers that Tom, George, and Eliza are property, that attempts to help George and Eliza are illegal, etc. It is well-written and incisive, but the relative idyllism of the first couple of chapters, and her using self-sacrificing Tom as an example (he will do what his masters ask unless it is against his faith), have led to sharp Values Dissonance since. (There was some at the time, too, but of a different variety.)

The eponymous Uncle Tom has been subject to serious Audience-Coloring Adaptation thanks to Minstrel Shows. A modern reader could be forgiven for being shocked to learn that, far from a villainous traitor or a bumbling fool, Tom is a wise figure, self-sacrificing in the extreme. Thanks to the determined propaganda of the Sons and Daughters of Confederate Veterans spreading the myth of the Lost Cause, and a surge in white supremacist racism following World War I, Minstrel Shows turned Uncle Tom into a by-word for servile clowns across the nation, giving him a terrible reputation in the black community. He is thus the Trope Namer for the trope Uncle Tom Foolery, in which a black performer acts the fool to entertain white audiences.

Stowe's novel was adapted for the stage not long after it was released and has been adapted for film many times. The 1914 film has been placed in the National Film Registry.