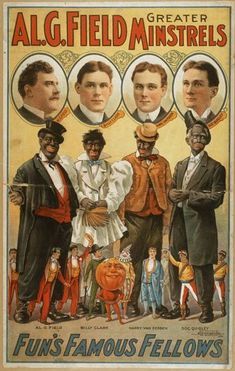 Neither fun nor famous these days.
Advertisement:

Minstrel shows were a type of American entertainment that originated before the American Civil War and continued to be popular throughout the 19th century and into the 20th. The show consisted of white performers appearing in blackface, often sitting in a semicircle on the stage and taking turns performing a variety of acts. The shows often had two emcees known as Mr. Tambo and Mr. Bones, named for the percussion instruments they traditionally played: a tambourine and a pair of animal ribs. The shows were heavily based on mocking and lampooning stereotypical black culture, but the music was also taken seriously for its artistic merit.

The minstrel show is significant for several reasons:

Although minstrel shows no longer exist, they have had an enormous impact on American pop culture, with minstrel songs such as Camptown Races and Oh! Susanna becoming highly familiar tunes, and many modern listeners being unaware of their minstrel origins. Many people in modern times might also be unaware that the popular joke "Why did the chicken cross the road?" is connected to minstrel shows as well. Some people such as film director Spike Lee have argued that modern American entertainment media starring black people is rooted in the legacy of minstrel shows.

Definitely not to be confused with Wandering Minstrel.