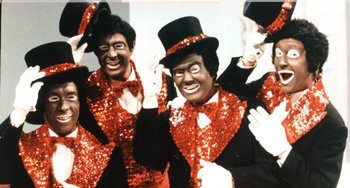 Oh dear.
Weekly Variety Show that debuted on the BBC in 1958. Inspired by traditional American Minstrel Shows, it featured a range of musical performances, mostly done by white people in blackface.
Advertisement:

You can probably see the issue here.

In its heyday, it was a huge ratings hit, achieving viewing figures in excess of 20 million in the early 1960s. Complaints about the show's racism began popping up by 1963 and only intensified afterward, eventually forcing the programme's cancellation... in 1978, with the traveling stage show continuing until 1989. Yes, really.

Today, The Black and White Minstrel Show is a major source of embarrassment to most if not all concerned - especially the fact that it was allowed to run for as long as it did.